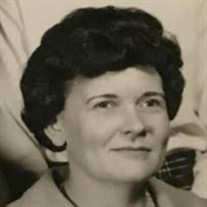 North Hampton – Louisa V. Keiling, 96, formerly of North Hampton, died Friday, May 14, 2021 at Birch Healthcare Center in Rochester. She was born in Cochituate, Mass., October 21, 1924 a daughter of the late Aiken and Georgianna (Cadrain) LaMotte. She graduated from Wayland High School, Wayland, Mass., and moved to North Hampton in 1961 residing here until 1992 and returned in 2004 from Florida. She was employed as a secretary at the North Hampton Elementary School for 22 years retiring in 1987. Mrs. Keiling was an avid Bingo player, enjoyed reading, puzzles, knitting and crocheting. She was the wife of the late Charles E. Keiling, Jr. who predeceased her in 1991 and was also predeceased by her daughter Nancy J. Warf in 2018 and granddaughter Amanda J. Warf in 2013. Family members her son, Charles E. Keiling, III and his wife Dawn of Rochester, seven grandchildren, three great grandchildren, nieces and nephews. Services will be held at 11 A.M. Friday, May 21, 2021 at the Remick & Gendron Funeral Home-Crematory, 811 Lafayette Road, Hampton with burial to follow in the Center Cemetery, North Hampton. Relatives and friends are respectfully invited. The family suggests donations to the NH S.P.C.A. P.O. Box 196, Stratham, NH 03885.

The family of Louisa V. Keiling created this Life Tributes page to make it easy to share your memories.

Send flowers to the Keiling family.