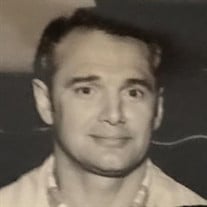 Hampton – Lt Col John C. Pignato Sr. USA, Ret., 83, of Hampton, passed away on Friday, February 12, 2020 at Exeter Hospital. He was born in Boston, MA on January 20, 1938 the son of the late Joseph Pignato and Enda (Sholes). Raised in Brookline, Mass., he graduated from Brookline High School. Leaving school early, he enlisted in the United States Army and proudly served 30 years. During his military career he had multiple tours in Vietnam, from which he received three Bronze Stars and a Purple Heart. Using his G.I. Bill, John received his undergraduate degree from Northeastern University and later received his master’s degree from American University. He went on to teach for several universities for a number of years after his career in the military. John was a gentle soul and first and foremost a family man, who enjoyed animals, especially his Labs. Surviving family members include his wife of 60 years, Pat (Nasuti) Pignato of Hampton; two children, Susan Pignato of Exeter, John C. Pignato Jr. and his wife Carline of Acton, MA and grandchildren, Colton, John Pignato III, Oliva and Christopher. All services will be private. In lieu of flowers, donation may be made the Wounded Warrior Project , P.O. Box 758516, Topeka, Kansas 66675-8516.