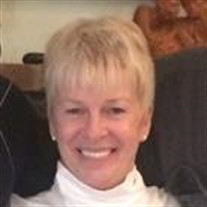 Hampton – Madaleen L. “Maddie” Ross, 65, of Hampton, passed peacefully surrounded by her loving family on Saturday, August 4, 2018 at Portsmouth Regional Hospital. Born in Claremont on May 28, 1953 to the late Cecil and Caroline (Deome) Mayhew, Maddie was raised in Newport and graduated from Newport High School in 1971. Following graduation, Maddie worked 26 years with Sturm, Ruger & Co. During that time, she began dating her future husband of 18 years, Peter Ross. The two had first met when they were just 2 and 6 years old before reconnecting years later. Maddie would join Peter in Hampton where she would help manage Ross Colony Court. She was beloved by RCC residents who treasured her kindness, warm smile and ability to brighten up any room or garden. Maddie was a strong, independent woman – traits reflected in the girls she helped to raise. She was a loving wife, mother and “Memere” who never missed a birthday or special celebration. She was the nucleus of a large family and was instrumental in coordinating family gatherings that often spanned four generations. She was also an avid reader, “professional” gift wrapper and bargain hunter, who enjoyed crafts, quilting and the beach, where she loved to lay in the sun. In addition to her husband Peter, family members include her children, Rene A. Boudreau and her husband Rene L. of Hampton Falls, Deborah Pouliot and her husband Michael of Hampton, Jess Garrett and her husband Chris of Kingston, MA and Stephen Ross Brown of Los Angeles, CA; sister, Kathy Gestay and her husband Al of Springfield and her children, Scott and Brent Johnson of Newport; grandchildren, Alison, Jackson, Ryan and Sydney; great nieces and nephews, Brendon, Ashlee, Brooke and Connor; mother in law Claire Ross and many beloved family and friends. The Ross family would like to offer a special thank you to Rebecca Lufkin and Michelle Merrill for the love and care they gave Maddie during her battle with cancer. Visiting hours will be held from 6 to 8 PM on Thursday, August 9, 2018 in the Remick & Gendron Funeral Home, 811 Lafayette Road, Hampton, NH. A mass of Christian burial will be celebrated at 11am on Friday, August 10, 2018 at Our Lady of the Miraculous Medal Church, 289 Lafayette Road, Hampton, NH. Burial will follow at the High Street Cemetery, Hampton. Relatives and friends are respectfully invited. In lieu of flowers donations may be made to Maddie’s Memorial School fund, a fund established to help further the education of students in the SAU 90 school system, c/o The Provident Bank, 321 Lafayette Road, Hampton, NH.

The family of Madaleen L. "Maddie" Ross created this Life Tributes page to make it easy to share your memories.

Send flowers to the Ross family.