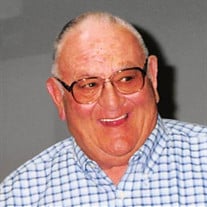 Exeter – “Spread your wings and fly our angel. Let your wings take you to the sky.” Malcolm J. Graves, Sr. passed away peacefully at home on July 13, 2019. He was born in Exeter, April 7, 1936 a son of the late Thomas and Florence (Whenal) Graves. Malcolm graduated from Hampton Academy with the Class of 1954 and received his Bachelor of Science degree from New Hampshire College. He was a Veteran who served with the US Navy. He was director of operations for Pine State By-Products of South Portland, ME. In his earlier years, he was employed in the accounting department at Western Electric. He made his home in Exeter the past five years. Malcolm was a member and the oldest Past Master of St. James Lodge #102 F. & A.M. of Hampton. He coached Little League and Babe Ruth and was a referee for high school basketball. He was an avid New England sports fan. He enjoyed family get-togethers, especially with his grandchildren. He was quite the jokester! He was predeceased by his wife, Marie A. (Mahar) Graves in 2005 and his son Steven L. Graves in 1997. He leaves his son, Malcolm J. Graves, Jr. and his wife Julie of Hampton, his daughter, Diane Seehagen and her husband Glenn of Waterboro, ME, his brother Lloyd Graves of North Hampton, grandchildren, Jayme, Julie, Elizabeth, Laura and her fiancé Sol, Kevin, Sarah and husband Danny and Alex, great grandchildren, Emily, Brody, Maddox, Rylie and a future great-granddaughter due in October. A graveside service will be held at 10 A.M. Saturday, July 20, 2019 at the High Street Cemetery, Hampton. Relatives and friends are respectfully invited. In lieu of traditional remembrances, donations may be made to St. James Lodge #102 F. & A.M., P.O. Box 1202, Hampton, NH 03842. Arrangements are by the Remick & Gendron Funeral Home-Crematory, Hampton.

The family of Malcolm J. Graves Sr. created this Life Tributes page to make it easy to share your memories.

Exeter – “Spread your wings and fly our angel. Let your wings...

Send flowers to the Graves family.