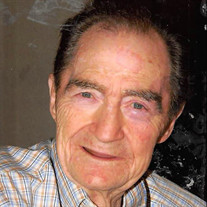 Hampton - Malcolm J. Moore, 93, of Hampton, passed away peacefully on February 11, 2020. Born in Brooklyn, NY on December 2, 1926, he was the son of the late John and Constance (Brodie) Moore. After serving in the U.S Navy for two years in the Pacific during World War II, he lived most of his life in Delaware County, PA where he worked as an insurance adjuster for MIC, the insurance division of General Motors. His wife of 64 years, Marion K. Moore, predeceased him in 2011. He is survived by his daughter Elizabeth A. Ratay and her husband, Thomas; daughter Janis T. Bonczewski and her husband, Kyle; son Douglas R. Moore and his wife, Diane; eight grandchildren and seven great-grandchildren. Malcolm was a voracious reader, particularly of history. He enjoyed bowling, golfing, working out (before it was common), traveling, acting in and directing little theater productions, and participating as an extra in performances at the Lyric Opera in Philadelphia. He possessed a distinct and omnipresent sense of humor: silly, puny and/or sarcastic. Malcolm also had a talent for writing funny little poems and song lyrics for his children and grandchildren. Late in life, he discovered a talent for watercolor depictions of animals, especially birds. Malcolm was happiest when he was in one of two places: the seashore and his second home in the Pocono Mountains of PA. At the latter location, he loved watching the many birds and small animals that were always present. He even had a short acquaintance with a black bear, fortunately at a safe distance. Malcolm was a multi-faceted man who had many friends and a love for life. At a future date, his ashes will be entombed next to his wife at Valley Forge Memorial Gardens in King of Prussia, PA. At that time, there will be a small memorial gathering with Veterans Military Honors. Assistance with the arrangements was by Remick and Gendron Funeral Home-Crematory, Hampton.

Hampton - Malcolm J. Moore, 93, of Hampton, passed away peacefully on February 11, 2020. Born in Brooklyn, NY on December 2, 1926, he was the son of the late John and Constance (Brodie) Moore. After serving in the U.S Navy for two years in... View Obituary & Service Information

The family of Malcolm J. Moore created this Life Tributes page to make it easy to share your memories.