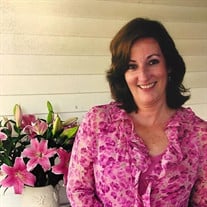 Hampton – Margaret Lacey Connolly, 56, of Hampton, died peacefully, Wednesday, March 30, 2016 at Massachusetts General Hospital in Boston after a long battle with cancer. She was born September 6, 1959, a daughter of the late John Edward and Carolyn Ella (Kennedy) Lacey. Her most fulfilling work was done as an event director with Global Citizens Circle, a non-profit organization that aimed to foster constructive change in the global community by assembling diverse groups of concerned individuals - from world leaders to local activists - for challenging discussion to stimulate meaningful and enduring resolution of the world's pressing concerns. During the last ten years she was employed as the executive assistant to the CEO of Pax World Mutual Funds in Portsmouth. She made Hampton her home for more than 30 years after coming from Oswego, NY, where she was born and raised. She was an avid gardener and enjoyed reading, cooking, and baking. She was predeceased by her husband, Matthew Connolly in 2000. She leaves her two children, Aaron Matthew Connolly and Caroline Margaret Connolly both of Hampton, two sisters, Brenda Lacey Winchek of Oswego, NY and Sharon Lacey Kirk of Kirkville, NY, several nieces and nephews, and her faithful canine friend Chester. Visiting hours will be from 5-8 P.M. Thursday, April, 7, 2016 at the Remick & Gendron Funeral Home-Crematory, 811 Lafayette Road, Hampton. Services will be at 11 A.M. Friday, April 8, 2016 at the United Methodist Church, 525 Lafayette Road, Hampton. A private burial will follow in the High Street Cemetery, Hampton. In lieu of flowers the family hopes you might plant something in your own garden to remember Margaret as you watch it grow. Also, the family suggests donations to the Margaret Connolly Trust at Piscataqua Savings Bank, 15 Pleasant St, Portsmouth, NH, 03801, or to the American Lung Association | Donation Processing Center | PO Box 7000 | Albert Lea, MN 56007-8001 www.lung.org.

The family of Margaret L. Connolly created this Life Tributes page to make it easy to share your memories.