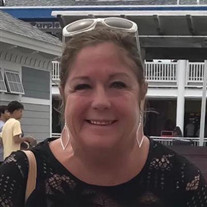 Hampton – Margaret E. Gauron, 62, of Hampton, passed away peacefully at her home on Sunday, October 14, 2018 of natural causes. She was born in Woburn, MA on February 20, 1956, a daughter of the late Albert and Marguerite (Canniff) Wall. Margaret was raised in Woburn, attended St. Charles Elementary School of Woburn and graduated from Northeast Metropolitan Regional Vocational Technical High School in Wakefield, MA with the Class of 1974. After high school, Margaret attended the Paul Mitchell School of Hair Design in Hawaii and also attended the Vidal Sassoon Academy in London. A self-employed hair stylist, Margaret had booths at many local hair salons including Eccentric Hair and Marguerite’s Beauty Salon, both of Hampton. Family was the most important part of Margaret’s life. She loved her children and adored her grandchildren; they were “her world.” She spent most of her summer days with friends and family, either at the pool or beach. Those were the moments she lived for and cherished She enjoyed her walks along the beach, always looking for sea glass. She loved to travel and would often spend long weekends up north by the mountains and lakes. Margaret was a great cook and was famous for her huge feasts where no one ever left hungry. She was also a die-hard New England Patriots fan and never missed a game. Margaret is survived by her daughter, Kelsey Gauron and her fiance Justin, of Seabrook, her son Casey Gauron and his wife Vallerie also of Seabrook and her son Cory Gauron and his wife Jacelyn of South Hampton. She is also survied by 5 grandchildren, Rylee Moran, Emanuel Gauron, Joseph Gauron, Cora Gauron and Anna Gauron. She also leaves her brothers, Daniel Wall and his wife Cara of Ipswich, MA, Timothy Wall and his wife Delia of Woburn, Robert Wall and his wife Patricia of Woburn and Edmund Wall and his wife Maureen of Woburn.In addition to her parents she was predeceased by her sister, Carol Scott. Visiting hours will be from 4 to 7 PM on Thursday, October 18, 2018 in the Remick & Gendron Funeral Home-Crematory, 811 Lafayette Road, Hampton. A Prayer Service will immediately follow at 7 P.M. in the funeral home.

Hampton &#8211; Margaret E. Gauron, 62, of Hampton, passed away peacefully at her home on Sunday, October 14, 2018 of natural causes. She was born in Woburn, MA on February 20, 1956, a daughter of the late Albert and Marguerite (Canniff) Wall. Margaret... View Obituary & Service Information

The family of Margaret E. Gauron created this Life Tributes page to make it easy to share your memories.

Send flowers to the Gauron family.