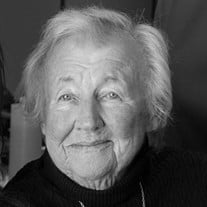 Hampton - Margaret “Peggy” Wingate Seavey passed away on Monday, February 27, 2017 at the age of 98. She was born in Newton, MA on February 20, 1919, a daughter of the late John Paine Wingate and Margaret Carley Wingate of Hampton. Peggy graduated from Hampton Academy in 1937 and attended the University of New Hampshire and the Burdett School of Business of Boston. She was the widow of Edward Seymour Seavey, Jr. who was the editor and publisher of The Hampton Union and Rockingham County Gazette from 1939 until his death in 1963. Peggy worked part-time with Edward at the Hampton Publishing Company and after her husband’ s death, she was employed by Kimball’s Department Store and Hodgdon, Wilson & Griffin CPA’s of Portsmouth. She was a long time member of the Portsmouth Country Club and served as captain of teams in the women’s league. She won a number of golfing awards over the years and had two holes in one. Peggy played golf until she was 90 and also enjoyed painting in watercolors, playing the organ and being in bridge clubs and bowling leagues. She was a life-long resident of Hampton, having built her home with Edward in 1940 at the Wingate Farm on Exeter Road. She leaves one daughter, Sarah Ann Lynch of Hampton, two sons John Wingate Seavey and his spouse Bruce A. Doty of Portsmouth and Edward Seymour Seavey III and his spouse Deborah Seavey of Rochester and their families, including seven grandchildren, Susan Silsby of Newfields, Sandra Silsby and her husband Edward Spuler of Dover, Sharon Sheridan and Andrew Brown of Newfields, Katherine Seavey of Rochester, Kristen Seavey of Philadelphia, PA, Edward Seavey IV of Saco, ME and Michael Seavey of Rochester. She also leaves five great grandchildren, Andrew Silsby, Molly Sheridan, Margaret Spuler, Ryder Brown and Liam Hough. Her family appreciates the loving care provided by the staff at the Partridge House in Hampton for the past four years. The funeral and burial will be private. A celebration of Margaret’s life will be held at a later date. In lieu of flowers, please donate to Easterseals of NH, Attn: Development Department, 555 Auburn St., Manchester, NH 03103, online at http://www.easterseals.com/nh/ways-to-give/ or to a charity of your choice.

The family of Margaret "Peggy" Wingate Seavey created this Life Tributes page to make it easy to share your memories.

Send flowers to the Seavey family.