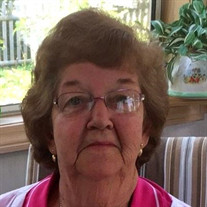 Hampton – Margaret M. “Peg” Riley, 79, of Hampton, passed away Monday, May 2, 2016 at Portsmouth Regional Hospital after a brief illness. She died peacefully with her family by her side. She was born on January, 20, 1937 in Boston, Mass., the daughter to the late Edmund and Margaret (Donovan) Boucher. Peg was a longtime resident of Hampton, NH, originally from North Quincy, Mass. She was a devout catholic and Eucharistic Minister at Our Lady of the Miraculous Medal Parish. She also lovingly volunteered and administered communion to patients at Portsmouth Hospital for the last 16 years. Peg was wife to the late Frederick T. Riley who predeceased her in 2000. In addition to her husband, she was predeceased by her son, Joseph Riley, in 2013 and her sister, Sister Eileen Boucher She leaves five children, Theresa Zuidema and husband Andy of Hampstead, Donna Riley of Quincy, Mass., Denise Pitman and husband John of Dover, Kathleen Ripley of Stratham, Paul Riley and wife Heather of Hampton. She was a devoted grandmother and was adored by her nine grandchildren, Shawn, Katelyn, Bryan, Steven, Andrew, Jim, Erin, Frederick, and Jack. She also leaves her brother, Edmund Boucher and wife Barbara of Ocean Park, ME, as well as, several nieces and nephews. Services - Visiting hours will be 5-7 P.M. Thursday, May 5, 2016 at the Remick & Gendron Funeral Home-Crematory, 811 Lafayette Road, Hampton. A mass of Christian burial will be celebrated at 10 A.M. Friday, May 6, 2016 at Our Lady of the Miraculous Medal Church, 289 Lafayette Rd. Hampton, NH. Burial will follow in the High Street Cemetery, Hampton. Relatives and friends are respectfully invited. In lieu of flowers, donations may be made to Our Lady of the Miraculous Medal Church OutReach Program, 289 Lafayette Road, Hampton, NH 03842.

The family of Margaret "Peg" Riley created this Life Tributes page to make it easy to share your memories.