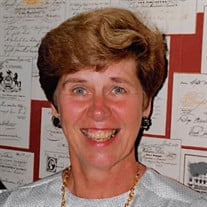 Rye – Margaret E. “Dellen” Schermerhorn, 85, a Rye resident since 1998, former longtime resident of Madison, NJ, passed away peacefully with family at her bedside on Sunday, October 11, 2020. She was born in Morristown, NJ on January 17, 1935 a daughter of the late William T. and Edith (Briscoe) Smith. Raised in Madison, she graduated from Madison High School with the Class of 1952. She went on to receive her Bachelor of Arts from Bucknell University, where she was a member of the cheerleading squad. Following graduation, she married her high school sweetheart and husband of 60 years, the late John R. Schermerhorn Jr, who predeceased her in 2016. Dellen was a founding member of Twigs, a branch of the Women’s Association for the Morristown Medical Center in Morristown, NJ. The Twigs plan and execute fundraisers including the annual “Mansions in May” the preeminent fundraising event for the hospital. For many years, she was a volunteer manager of the Bargain Box, a Thrift Boutique that raises money for the hospital. When she moved to the seacoast, she volunteered for many years at Operation Blessings in Portsmouth. She was an active member of the Abenaqui Country Club in Rye Beach. She was an avid golfer and master level bridge player. She enjoyed the outdoors, especially hiking, but most of all she enjoyed spending time with her grandchildren. Surviving family members include her children, Julie Siciliano and her husband Stephen of Madison, NJ, John R Schermerhorn III and his wife Dawne of Rye, Jeffrey Schermerhorn of Rye, Jill Schermerhorn of Stanhope, NJ and 8 grandchildren and 1 great-grandchild, brother, Richard A. Smith and his wife Nancy of Rye . A private celebration of life will be held at a later date. In lieu of flowers, memorial donations may be made to Community Options , 16 Farber Road, Princeton, New Jersey 08540 or Autism Speaks , 1060 State Road, Second Floor, Princeton, NJ 08540.

The family of Margaret E. "Dellen" Schermerhorn created this Life Tributes page to make it easy to share your memories.

Send flowers to the Schermerhorn family.