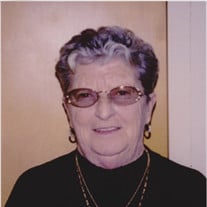 Seabrook, NH - Marguerite “Margie” H. Dow, 86, of Seabrook, formerly a long time resident of Newburyport, Mass., passed away peacefully in her sleep on June 16, 2017 at home with her loving family by her side. Margie was born on September 25, 1930 in Newburyport, a daughter of the late Chalmers W. and Anges V. (Delaney) Bell. She was a dedicated hard worker, spending many years employed for Gould-Shawmut in Newburyport, before retiring. She enjoyed knitting and sewing beautiful blankets, hats, mittens and most importantly, sweaters for her loved ones. Margie also enjoyed walks down town Newburyport making her favorite stop at TCBY for ice cream. She loved a classic Disney movie in the company of her grandchildren. She believed Sunday mornings were best for maple brown sugar oatmeal. She found most joy in being a loving mother, sister and grandmother. She is the heart of many memories and will be greatly missed. She is survived by her son, David Dow and his wife Janet, her daughter, Jody Hughes and her husband Richard all of Seabrook, her sister, Charlotte Flynn and her daughter in law Carol George both of Salisbury Mass., her 12 grandchildren and 20 great grandchildren. Margie was predeceased by her loving children, Charles George Jr., Tammy Leblanc and Terry Hall. She was also predeceased by her grandson, Charles George III, her sister Virginia Pike and her brothers William Bell, Stanley Bell, Edward Bell & Chalmers Bell Jr. Services will be held at 1 P.M. Saturday, June 24, 2017 at the East Parish Methodist Church, 8 Lafayette Road, Salisbury Mass. Burial will follow in the Highland Cemetery, Hill Street, Newburyport. Donations may be made to a charity of one’s choice.

Seabrook, NH - Marguerite &#8220;Margie&#8221; H. Dow, 86, of Seabrook, formerly a long time resident of Newburyport, Mass., passed away peacefully in her sleep on June 16, 2017 at home with her loving family by her side. Margie was born on... View Obituary & Service Information

The family of Marguerite H. Dow created this Life Tributes page to make it easy to share your memories.

Send flowers to the Dow family.