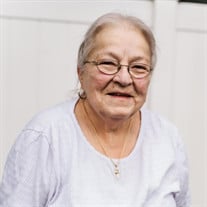 Rindge, NH - Marie E. Moschner, 80, of Rindge, formerly of Fitchburg, MA, Eden Mills, VT and North Hampton, passed away peacefully on Saturday, January 29, 2022 after an extended illness. Marie was born in Montague, MA on December 20, 1941, a daughter of the late Howard A. and Lorraine E. (Bergeron) Smith. She was the widow of Bruce F. Moschner. She resided many years in Fitchburg, MA before moving to Eden Mills, VT where she lived for some 20 years. Marie relocated to North Hampton in 2002 before moving to Rindge in 2019 to be near family. She enjoyed gardening and hand crafts, such as crocheting, knitting, bead work, and basketry. Most of all she loved spending time with her family and being outdoors. Family members include her son Dana B. Moschner and wife Shelby of Sevierville, TN; two daughters, Dawn M. Moschner of New Market, TN and Darlene S. Cormier and husband Roger of Winchendon, MA; five grandchildren; ten great-grandchildren; two sisters, Lori A. Crean of Charlemont, MA and preceded in death by her sister, Gloria A. Smith of Hampton, NH. In the spring a private graveside service and celebration of life, will be held in the Eden Corner’s Cemetery, Eden, VT. In lieu of flowers, donations may be made to Children's Hospital Trust, One Autumn Street #731, Boston, MA 02215-5301, https://www.childrenshospital.org/.

The family of Marie E Moschner created this Life Tributes page to make it easy to share your memories.

Send flowers to the Moschner family.