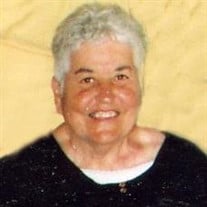 North Hampton, NH – Marietta Ann Guthrie, 83, a 33 year resident of North Hampton, passed away peacefully on Tuesday, March 19, 2019. She was born in Whitehall, NY on March 24, 1935, a daughter of the late James and Armelinda (Scrimo) Sacco. Raised in White River Junction, VT she graduated from Harford High School, where she was a member of the band and a star on the women’s basketball team. Following graduation Marietta worked for AT&T, where she met her future husband of 44 years Kenneth Guthrie whom she married in 1974. Together they went on to own and operate Kens Pub in West Lebanon, Scoops Place in Winsor, VT, K&M Tobacco Shop in Franklin and Kens Tavern in Putney, VT. Marietta was a communicant of Our Lady of the Miraculous Medal Church in Hampton, where she was active in the former Catholic Women’s Club. She was an Avid Red Sox, Patriots and Notre Dame football and girls basketball fan, who enjoyed Bingo, playing the piano, going to the Oxford Casino and Sea Shell Stage at Hampton Beach in the summers. In addition to her husband Kenneth of North Hampton, surviving family members include her brothers, Jerry Sacco of Queensbury, NY and James Sacco of Auburn; several nieces, nephews, great nieces and nephews, cousins and many dear friends. In addition to her parents she was predeceased by her brothers, Harry, Andrew, Anthony and Louis Sacco and sister Philomena Sacco. The family would like to give a special thanks to the staff at Portsmouth Hospital and Durgin Pines in Kittery ME for the loving care and devotion they gave Marietta and her family during such a difficult time. There will be no visiting hours. A mass of Christian burial will be celebrated at 11 AM on Saturday, March 30, 2019 in Our Lady of the Miraculous Medal Church, 289 Lafayette Road, Hampton. Burial will be in the spring at the Mount Olivet Cemetery, Hartford, VT. In lieu of flowers, donations may be made to OLMM Church OutReach Program, 289 Lafayette Road, Hampton, NH 03842.

The family of Marietta Ann Guthrie created this Life Tributes page to make it easy to share your memories.

Send flowers to the Guthrie family.