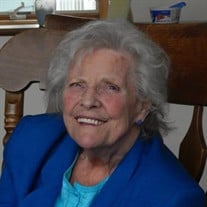 Hampton – Marilyn J. White, 87, of Hampton died peacefully, Monday, March 7, 2016 at her home. She was born October 28, 1928 in Beverly, Mass., the daughter of the late Edward G. and Jessie (Young) Ferry. Mrs. White graduated from Malden, Mass., High School with the Class of 1946 and Academy Modern in Boston. She was employed as a waitress at the former Sportsman Lodge in the Newburyport, Ma and later at the former Marty’s Steak house in north Hampton. Her last employment was as a sales associate with the former Ames department store in Seabrook. Marilyn moved to Hampton in 1981 coming from Newburyport and was a former member of the First Congregational Church of Rowley, who loved to travel. She was the wife of the late George F. White who predeceased her in 1976. Family members include seven children, Joan White of Seabrook, Bruce White and his wife Gail of New Durham, Gayle Case of Exeter, Donna LoConte and her husband John of Farmington, George White and his wife Cindy of Gilbert, AZ and Thomas White of Hampton; 17 grandchildren; 15 great grandchildren and several nieces and nephews. In addition to her parents and husband she was predeceased by her sons, Keith, Gregg and Scott White and her brother Edward Ferry. A visiting hour will be held from 10 to 11 AM on Friday, March 11, 2016 in the Remick & Gendron Funeral Home-Crematory, 811 Lafayette Road, Hampton. A memorial service will immediately follow at 11 AM in the funeral home. Relatives and friends are respectfully invited. In lieu of flowers the family suggests donations to the Boston Children's Hospital, c/o Boston Children’s Hospital Trust, 401 Park Drive Suite 602, Boston, MA 02215.

The family of Marilyn J White created this Life Tributes page to make it easy to share your memories.