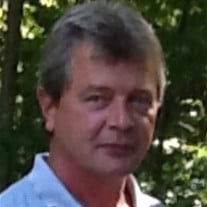 East Kingston - Mark E. Chase, 60, of East Kingston, passed away peacefully at his home Tuesday, March 19, 2019 with loving family by his side after a lengthy and courageous battle with cancer. He was born May 15, 1958 in Newburyport, MA to Norma (Perkins) Frost and later made his home in East Kingston. Mark was employed at the Exeter branch of The Granite Group for the past 20 years as an inside sales representative. He was active with The Granite Group until his illness prevented him from continuing. Family and friends were the most important part of Mark’s life. When he wasn’t working, he enjoyed eating and drinking, sitting around a fire pit listening to music and cooking on the grill with his friends and family. Mark took pride in working around his home and he was always taking care of his fish pond, planting flowers each year and cultivating a vegetable garden and he made sure the birds were fed. Although in the early days, Mark thoroughly enjoyed hunting with friends, as the years passed, he would have rather taken a camera into the woods and photographed the wildlife. When he wasn’t taking photos he enjoyed the friendship he had with his canine companions. He also enjoyed spending time fishing with his brother “Chirp” and nephew Bryan in Acton Maine. He shared 19 years of marriage with his wife Elizabeth. In addition to his wife he leaves his daughter Tiffanie Chase of Seabrook, his son Matthew Chase and his wife Tania of Hampton, his grandson Bayley Boudreaux of Seabrook, his siblings, Donna Toler and her husband Jerry of Orange Park, Florida, Donald Chase and his wife, Lisa, of Seabrook, his sister Lisa Wilson and brother-in-law Michael Wilson, Sr. of Seabrook, NH and several nieces and nephews. He was predeceased by his mother Norma L. (Perkins) Frost. Visiting hours will be from 4-7 P.M. Tuesday, March 26, 2019 at the Remick & Gendron Funeral Home-Crematory, 811 Lafayette Road, Hampton. Services will be at 11 A.M. Wednesday March 27, 2019 in the funeral home. Relatives and friends are respectfully invited. In lieu of flowers donations may be made to St Jude Childrens Research Hospital

East Kingston - Mark E. Chase, 60, of East Kingston, passed away peacefully at his home Tuesday, March 19, 2019 with loving family by his side after a lengthy and courageous battle with cancer. He was born May 15, 1958 in Newburyport, MA to... View Obituary & Service Information

The family of Mark E. Chase created this Life Tributes page to make it easy to share your memories.

Send flowers to the Chase family.