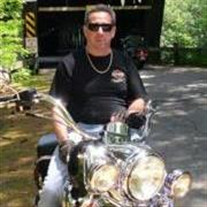 Raymond – Mark A. “Sparky” Perkins, 55, of Raymond, died on Tuesday, March 29, 2016 at his home, surrounded by loving family, after a courageous struggle with cancer. Mark was born on March 14, 1961 in Exeter, a son of Wilbur D. Perkins of Merrimack and the late Mary E. (White) Perkins Mark was raised in North Hampton and was a 1979 graduate of Winnacunnet High School in Hampton. Upon graduation, he went to work for McDevitt Trucks of Manchester. Mark was a hard worker and was the transmission and driveline specialist at McDevitt for over 37 years before he became ill. He was also employed at Abenaqui Carriers of North Hampton for the last 10 years. Above all else, Mark was a family man. His wife and children were his world and he cherished them with all his heart. He was a fantastic provider and his family was never in want. Mark had a gift for socializing; he was always smiling and made others around him feel good. Mark also enjoyed his Harley-Davidson and was an avid hunter, particularly those trips with his father-in-law, Charles, and brother-in-law, Greg. He leaves his beloved wife, Florence “Flossie” Perkins of Raymond; his stepdaughter, whom he raised, Mandy Doggett, also of Raymond; and his brothers, Wayne Perkins and his fiancée Danita Marshall of Amherst and Bruce Perkins of Merrimack. He is also survived by his in-laws, Charles and Natalie Marshall; his very special niece, Shelby Marshall as well as his other nieces, nephews, cousins, close friends and co-workers. In addition to his mother, Mark was predeceased by his brother, Brian Perkins and his stepdaughter, Dixie Bregy. Visiting hours will be from 4 to 8 pm on Monday, April 4, 2016 in the Remick & Gendron Funeral Home – Crematory, 811 Lafayette Rd., Hampton. Services will be held on Tuesday at 11 am at the Four Corners Advent Christian Church, 5 Farm Ln., Seabrook. Burial will be in the Wildwood Cemetery, Seabrook. Family and friends are respectfully invited.

The family of Mark A. "Sparky" Perkins created this Life Tributes page to make it easy to share your memories.