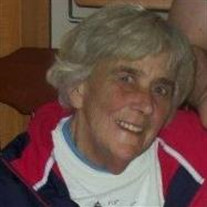 Greenland – Mary Catherine Emmott, 69, of Greenland, formerly of Hampton and Lowell, Mass., died Saturday, July 2, 2016 at Portsmouth Regional Hospital. She was born April 20, 1947 in Lowell, Mass., the daughter of the late John T. and Mary M. (Lettrell) Emmott. Mary Catherine graduated from St. Michael Grammar School and Keith Hall High School both in Lowell and from Fitchburg State College in Fitchburg, Mass. She taught elementary education at Pawtucketville Memorial Elementary School in Lowell for nearly 30 years. A long time summer resident of Hampton, she made her home in Hampton year round after her retirement and for the past several years lived in Greenland. Mary and her beloved dog Minnie were very active in Canine Performance Trials for many years. She leaves two brothers, Robert P. Emmott and his wife Maureen of Greenland, John Emmott and his wife Debbie of Nashua, several nieces, nephews, grandnieces and grandnephews, and her best canine friend Minnie. A mass of Christian burial will be celebrated at 11 A.M. Monday, July 11, 2016 at Our Lady of the Miraculous Medal Church, 289 Lafayette Road, Hampton. Relatives and friends are respectfully invited. In lieu of flowers donations may be made to New Hampshire, SPCA, P.O. Box 196, Stratham, NH 03885 or go to /www.nhspca.org/. Arrangements are by the Remick & Gendron Funeral Home-Crematory, Hampton.

The family of Mary Catherine Emmott created this Life Tributes page to make it easy to share your memories.

Send flowers to the Emmott family.