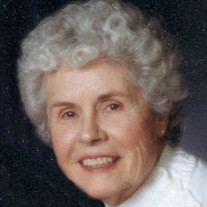 Hampton - Mary Eileen Gallagher, 94, of Hampton, passed away on Monday, December 17, 2018 surrounded by her loving family. Born in Beverly, Massachusetts June 22, 1924, eldest daughter of the late David F. Creeden and Mary A. Ouimette. Resided in Danvers, Mass, graduating from Danvers High School. Married to Robert Thomas (Bob) Gallagher on October 22, 1949, until his death in 2001. Mary became an experienced accountant and worked for a variety of companies in Massachusetts and Durham and Hampton, New Hampshire after her children were grown. Mary enjoyed working in her gardens and watching the variety of birds and other wildlife in her yards, walking on the beach and taking long drives into the mountains of New Hampshire and Maine. Many road trips were taken with the kids as they were growing up all along the Eastern seaboard. She and Bob also enjoyed sailing along the coast for many years. Mary was a devoted member of the communicant of Our Lady of the Miraculous Medal church in Hampton, New Hampshire. Mary is survived by her daughter and son-in-law, Eileen Gallagher and Steven High; son and daughter-in-law, Robert and Janet Gallagher; daughter and fiancée, Joan Gallagher and Tom Light and son and daughter-in-law, David and Maria Gallagher and their children, John and Jennifer; brother and sister-in law, Jack and Ann Creeden; brother and sister-in-law, William and Rita Creeden; sister Margaret “Babe” Nangle and numerous nieces, nephews and cousins. A Mass of Christian Burial will be celebrated at a later date. In Lieu of flowers, donations may be made in her name to the National Audubon , 225 Varick Street, New York, NY 10014 or the National Parks Foundation , 1110 Vermont Ave, NW, Suite 200, Washington, D.C. 20005.

The family of Mary E. Gallagher created this Life Tributes page to make it easy to share your memories.

Send flowers to the Gallagher family.