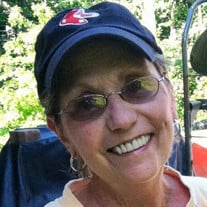 Seabrook – Mary Elizabeth Gibson, 74, of Seabrook and formerly of Lynn, MA, passed away peacefully on Saturday, June 15, 2019 after an extended illness. Mary was born in Lynn, MA on December 3, 1944, a daughter of the late Everett and Mary R. (Didio) Varney. She was raised in Lynn and graduated from Lynn Classical High in 1962. She married her husband, Richard R. Murray, Sr. shortly after high school and they settled in Lynn to raise their son. Family was her primary focus but Mary did work as an office manager at the former Saugus General Hospital and with Traveler’s Insurance until her retirement in 1994. Mary was a true Boston sports fan and especially loved her Red Sox. She also enjoyed playing Bingo, scratch tickets and visits to Foxwoods. Above all else, Mary loved her family and in her retirement years she cherished her time caring for her 3 grandchildren. Family members include her son, Richard R. Murray, Jr and his wife, Kathleen of South Hampton, her grandchildren, Richard Murray, III and his wife Deanna of Pembroke and Cameron and Kyle Murray of South Hampton and her great granddaughter, Cadence Murray. She also leaves her sisters, Geraldine Hiltz of Seabrook and Denise Kysor of Brentwood, her ex-husband, Richard R. Murray, Sr. and several nephews. In addition to her parents and her second husband Bruce D. Gibson, Mary was predeceased by her brother, Donald Varney. Family and friends may visit on Monday, June 24, 2019 from 10 to 11 AM followed by a Memorial Service starting at 11 AM in the Remick & Gendron funeral Home – Crematory, 811 Lafayette Rd., Hampton. Burial will be private. In lieu of flowers, donations may be made to the American Lung Association Donation Processing Center PO Box 7000, Albert Lea, MN 56007-8001.

Seabrook &#8211; Mary Elizabeth Gibson, 74, of Seabrook and formerly of Lynn, MA, passed away peacefully on Saturday, June 15, 2019 after an extended illness. Mary was born in Lynn, MA on December 3, 1944, a daughter of the late Everett and... View Obituary & Service Information

The family of Mary E. Gibson created this Life Tributes page to make it easy to share your memories.

Send flowers to the Gibson family.