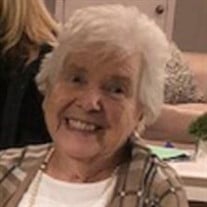 Durham - Our dear and loving mother, grandmother and great grandmother died peacefully in Durham, New Hampshire, where she had spent her last years in a wonderful assisted living facility. Formerly of Salem, Oregon, Jackie’s trademark bright smile brought joy to everyone who was lucky enough to know her. Born in Everett, Washington, Jackie was the younger of two daughters of Mary and Wilbur Lamb. She and her sister Barbara began their long term love and affection for all things horses following her family’s move to a farm in Yamhill, Oregon. After graduating from Yamhill High School in 1948, Jackie attended Linfield College in McMinnville, Oregon, where she met Paul Halsor. Jackie and Paul married in 1951 while Paul completed his degree in physical education. A series of high school teaching/coaching positions took Jackie and Paul to Marcola and to Canyonville Oregon, raising a family along the way. They eventually settled in Salem where Jackie enjoyed her role as loving mother to four children, devoted wife to Paul, and key member of a lively neighborhood community that included her beloved sister Barbara and her family. Following Paul’s untimely death in 1973, Jackie worked as an assistant interior decorator, a teacher’s aide at Chemeketa Community College, and for 13 years, a trade book buyer at the Willamette University Bookstore. She retired from her job at the bookstore in 1994. In her later years in Salem, Jackie’s children, grandchildren and great-grand children became the source of her endearing love and joy. Jackie also continued her passion for riding and caring for horses at the local saddle club. She loved to travel, not only to visit family members across the country, but also to join her family on exciting trips to global destinations, including Europe, Asia, Central America and New Zealand. Jackie’s presence on international adventures were legendary, filled with laughter and her undaunted desire to try anything, anywhere. Jackie’s enduring kindness and generosity towards others were hallmarks of the way she lived her life. Her special gift was the total acceptance and respect for every person in every walk of life. Surviving Jackie are her three sons, Mark and his wife Vicki of North Hampton, New Hampshire, Sid and his wife Cydney of Dallas, Pennsylvania, and Jim of Salem, Oregon. Her grandchildren are Abbey Marceau, of Hampton, New Hampshire; Shaun Halsor, of Fort Lauderdale, Florida; Kelly Crago, of Woodstock, New York; Chelsea Halsor, of Waltham, Massachusetts; Kyla Halsor, of Tacoma, Washington; Jacob Halsor, of Salem, Oregon; Sadie Halsor, of Stayton, Oregon; and five great-grandchildren in New Hampshire, Florida, and New York. Jackie’s family would like to acknowledge and send heartfelt appreciation to the health care professionals at Brookdale Spruce Wood senior living facility, Durham New Hampshire, for their outstanding care and compassion. A memorial service will be held in Salem, Oregon, in 2021. In lieu of flowers, the family requests that a memorial donation be made to the Dementia Society of America .

The family of Mary Jacqueline "Jackie" Halsor created this Life Tributes page to make it easy to share your memories.

Durham - Our dear and loving mother, grandmother and great grandmother...

Send flowers to the Halsor family.