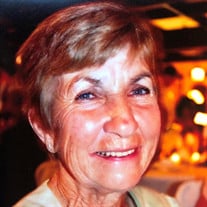 Hampton, NH – Mary E. Havey, 85 of Hampton, formerly of Orono, ME passed away peacefully surrounded by her beloved children, on Wednesday July 28, 2021 at Port Healthcare in Newburyport, MA. Mary had battled many illnesses over the last few years and was a fighter who never once complained. A trait she found admirable in her own father. She was born in Bangor, ME on December 23, 1935 and raised in Winterport, the daughter of the late William J. and Frances R. (Eldridge) Hewitt, Sr. Mary graduated from Gould Academy in Bethel, ME and continued on to Boston University’s School of Nursing becoming a Registered Nurse, a career that fit her kind and gentle personality well. Mary spent her early years raising her children in Billerica, MA where she met her lifelong best friends who together embodied the term “it takes a village” by creating a place where every house on the block felt like a home to the neighborhood children. In 1980, Mary moved to Orono, ME, where she continued to involve herself in her local community. She was employed by Community Health & Counseling in Bangor, ME and was active in the Orono Methodist Church, where she served as a Sunday school teacher. She was also active with the Order of the Eastern Star. After summering in Hampton since 1972, Hampton became her year-round home in the early 2000’s, and she became active at the Hampton United Methodist Church and a member of the Hampton Walkers, where she made many new and lasting friendships and was dearly beloved by all who knew her. Family was everything to Mary and she found her greatest fulfillment as mother of her seven children and in her later years as “Grammy” to her grandchildren but her love reached far beyond her family. She was the type of person who had a kind word for everyone and put people above all else. She made people instantly happy for having met her, and always had a listening ear. Mary was full of wisdom and had a wonderful way of making people feel especially loved and important. While always up for an adventure, evidenced by her many trips taken with family across the globe, Mary certainly knew how to enjoy and be content with the little things in life and was an example to us all. She was predeceased by her husband Richard Havey, the father of her children, Robert Hall, her son Edwin Hall (Allison) and her brother William Hewitt, Jr. Mary is survived by her six children, Laurie Albert (Madison) of Winterport, ME, Robert Hall, Jr. (Kasey) of Winthrop, MA, Eric Hall (Mary) of Andover, MA, Sara Belisle of Kensington, William Hall of Winthrop, MA, Ellen Hall of Newton, MA and 14 grandchildren. A visiting hour will be held at 10:00 a.m. on Saturday August 14th at the United Methodist Church, 525 Lafayette Road, Hampton with services immediately following at 11:00 a.m. In lieu of flowers, donations may be made to Big Ed 183 State Street, Third Floor, Boston, MA 02190. Big Ed is a charity created in memory of Mary’s youngest son Eddie to benefit people being treated for cancer.

Hampton, NH &#8211; Mary E. Havey, 85 of Hampton, formerly of Orono, ME passed away peacefully surrounded by her beloved children, on Wednesday July 28, 2021 at Port Healthcare in Newburyport, MA. Mary had battled many illnesses over the last... View Obituary & Service Information

The family of Mary E. Havey created this Life Tributes page to make it easy to share your memories.

Send flowers to the Havey family.