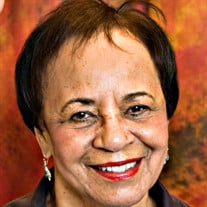 Portsmouth - With the same fierce and determined independence in which she lived her life, Mary Z. Walker, 95, passed away at home on November 1, 2021. Mary was born in Everett, Massachusetts on June 24, 1926 to Randolph Walker and Mildred (Brewer) Walker. She was the youngest of six children which included Edwin, Querida, George, Randolph, and Justina, all of whom pre-deceased Mary. As a young woman Mary was employed by the Internal Revenue Office where she provided training and educational seminars throughout the country. Her career continued to advance and she retired after over 30 years of dedicated service. After settling in Portsmouth in the early 70s, she eventually brought her mother and aunt to Portsmouth in order to care for them. A firm believer in doing your part for the community, Mary volunteered her time, energy, and ideas with many local organizations. Twice she was president of the Woman’s City Club, and head of the Portsmouth Hospital volunteers where she took responsiblity for running their gift shop (pre-HCA). She volunteered at the Portsmouth Chamber of Commerce and The Music Hall as well as serving on the Music Hall’s Board of Directors. In her spare time, one of her favorite volunteer activities was reading to the children at the day-care center on Pease. She was a longtime member of the Herb Society where she made dear friends she treasured. Mary was the first Chair of the Heritage Hill condo association when the development on Maplewood Avenue was first built. She moved there in 1984 and became one of its first residents. Mary loved watching out her window (a favorite pastime even before Covid) to see who was doing what and going where. She made many friends there over the years, some who have already passed, others who will miss her tremendously. After retiring from the IRS, Mary decided she wanted to complete her college education. She attended Southern New Hampshire University and earned her Bachelor’s degree – an accomplishment she was very proud of (as were we all!) During her retirement, Mary spent much time traveling and exploring the world. She loved meeting new, and interesting people. Her travels took her far and wide, but favorites were Scotland, Japan, Italy, Morocco, Greece, and the Caribbean where she still had family on St. Vincent. Mary leaves behind her niece Lauren Walker Newman (Maryland), nephews Danny Mann, Jr., George O. Walker, Christopher Mann, 9 grandnieces and nephews. She also leaves behind her most special friend “Tina” her cat, one in a long line of her feline friends which also included Joy, Annie, Mitzi, and GI Joe, all of which are with Mary now. Mary’s life will be celebrated by family and friends at 3 pm on Sunday, November 14, 2021 at St. John’s Episcopal Church, 101 Chapel St., Portsmouth. Mary’s favorite wish for her family, friends, and strangers, was that they always have a “positive day.” She would say it directly to you when taking her leave. It was her message on her answering machine. So in lieu of flowers, do something positive today for someone in your world in honor of Mary Z.

Portsmouth - With the same fierce and determined independence in which she lived her life, Mary Z. Walker, 95, passed away at home on November 1, 2021. Mary was born in Everett, Massachusetts on June 24, 1926 to Randolph Walker and Mildred (Brewer)... View Obituary & Service Information

The family of Mary Z. Walker created this Life Tributes page to make it easy to share your memories.

Portsmouth - With the same fierce and determined independence...

Send flowers to the Walker family.