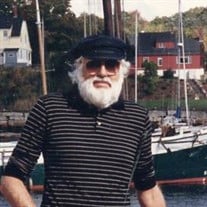 Greenland – Maurice G. “Moe” Mayo, 86 of Greenland, died peacefully on Tuesday, April 12, 2016 at his home surrounded by family. He was born in Manchester May 22, 1929 a son of the late Earl and Yvonne (Hemond) Mayo. Raised in Manchester he graduated from Saint Joseph High School and then Bentley College, where he later served as a Trustee. He started his career at Improved Machinery (IMPCO) in Nashua, eventually becoming CEO. IMPCO was acquired by Ingersoll Rand Corporation and Maurice transferred to Ingersoll Rand’s headquarters in New Jersey as the corporations Vice- President Corporate Controller. He eventually became President of the Construction Equipment Group as well as a corporate officer of Ingersoll Rand. Maurice completed his career as President of the Pulp & Paper Equipment Group in New Hampshire. Maurice had a lifelong love of boating which extended from owning many sailboats, trawlers, studying boatbuilding and surveying. Upon retirement in 1985, Maurice and his wife Terry cruised the New England coast on their beloved boat the “Mystique” for many years. He was a family man with a strong faith in God who had many interests and talents. He never lost his sense of curiosity or enthusiasm about the world around him. He loved reading about history, watching westerns, playing chess, golf, pool and more recently took up painting. However nothing compared to his deep and loving devotion to his wife Terry. His laughter and infectious sense of humor has endeared him to all that know and love him Family members include his wife of 65 years Theresa (Vander-Heyden) Mayo of Greenland; children, David Mayo and his wife Dolores, Daniel Mayo and his wife Linda, Diane Mayo and her husband Ric Dunworth, Peter Mayo and his wife Beth, Gregory Mayo and his wife Jennifer; 15 grandchildren and 6 greatgrandchildren. In addition to his parents he was predeceased by his brother Clem Mayo. Visitation will be held from 2 – 4 PM and 6 – 8 PM on Friday, April 15, 2016 in the Remick & Gendron Funeral Home - Crematory, 811 Lafayette Road, Hampton. A Mass of Christian Burial will be celebrated at 10 am on Saturday, April 16, 2016 in the St. Theresa Parish Church, 815 Central Rd., Rye Beach. Relatives and friends are respectfully invited. Burial will be private. In lieu of flowers, memorial donations in Moe's name may be made to the Sisters of the Precious Blood Monastery, 700 Bridge Street, Manchester, NH 03104 or the Cross Roads House, 600 Lafayette Road Portsmouth, NH 03801. Please visit www.RemickGendron.com to view Maurice’s memorial website, sign his tribute wall or for directions.

The family of Maurice G. "Moe" Mayo created this Life Tributes page to make it easy to share your memories.

Send flowers to the Mayo family.