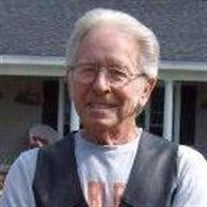 Seabrook – Maurice B. “Moe” Randall, Jr., 81, of Seabrook, died Sunday, April 14, 2019 at Exeter Hospital after a period of failing health. He was born in Seabrook May 15, 1937 the son of the late Maurice B. and Beatrice (Trickey) Randall, Sr. Moe was raised in Seabrook and resided here his entire life. He was employed by the former Bailey Corporation for 37 years retiring in 2000. He loved his Harley Davidson motorcycles and enjoyed riding up until last year. He was a member of the Sons of the American Legion Post 70 and the American Legion Riders Club. He was an avid pool player and loved camping with family and friends. He shared 33 years of marriage with the love of his life, Cheryl “Shay” (Hart) Randall. In addition to his wife, family members include his daughter and son-in-law, Terri and Bob Franklin along with their two children Gage and Kady Franklin. He is also survived by his daughters Maureen Paquette, Betty Randall and Terry Provencher, grandchildren, Maurice Randall, III, Josh Provencher, Justin Fowler, 2 great grandchildren, Luke Fowler and Bonnie Lou Fowler, his brother Robert McLaughlin and his sister Ivy Jones, nieces and nephews. In addition to his parents he was predeceased by two sisters Jo Jo and Alice. A graveside service will be held at 11 A.M. Thursday, April 18, 2019 in the Wildwood Cemetery, Seabrook. Relatives and friends are respectfully invited. In lieu of traditional remembrances donations may be made to a charity of one’s choice. Arrangements are by the Remick & Gendron Funeral Home-Crematory, Hampton.

The family of Maurice "Moe" Randall Jr. created this Life Tributes page to make it easy to share your memories.

Send flowers to the Randall family.