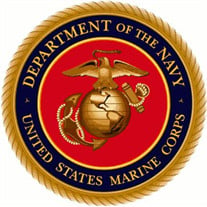 Salisbury, MA – Melvin P. Damico, 87, of Salisbury, died Wednesday, April 20, 2016 at the Merrimack Valley Hospice House in Haverhill. He was born February 27, 1929 in Clarksburg, WV, a son of the late Lawrence and Druza (Davidson) Damico. Mel was a self-employed truck driver for many years and had previously driven for Miles River Gravel of Rowley and the former Pearson Construction of Byfield. Mel was also a proud veteran of the United States Marine Corps. He leaves his son, Michael Damico and his daughter, Leda of NJ; his son Keith, his daughters, Linda, Carolyn and Cynthia, all of Iowa; his sister-in-law and caregiver, Donna Perkins of Salisbury and his step-daughter, Ann Perkins of Seabrook, NH. He also leaves 24 grandchildren and 20 great grandchildren and his close friend, David Murry of ME. He was predeceased by his beloved wife, Luannah (Frascone) Damico and his son Melvin Damico, Jr. Graveside services with military honors will be held at 11:30 AM on Wednesday, April 27, 2016 at the Hillside Cemetery, Rte. 1, Seabrook, NH. Relatives and friends are respectfully invited. In lieu of flowers, memorial donations may be made to the Wounded Warrior Project, P.O. Box 758517, Topeka, KS 66675 or online at www.woundedwarriorproject.org.

The family of Melvin P. Damico created this Life Tributes page to make it easy to share your memories.

Send flowers to the Damico family.