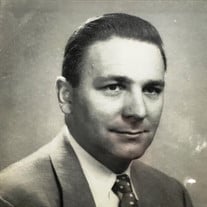 Newmarket – Merle M. James, 93, of Newmarket, our “sweetheart,” passed away peacefully on February 13, 2020 at the Exeter Hospital. He was born at St. Marie’s Hospital in Milwaukee, WI on September 8, 1926, a son of the late William G. James and Laura (Schultz) James. He shared over 55 years of marriage with the late Charlotte (Beanie) Ramberg who died in 2005. Merle graduated from the University of Wisconsin in 1950 and was member of the Phi Delta Theta Fraternity. In 1950 he married Charlotte and from the time they met on a blind date, Merle was smitten, in love, and totally devoted to her his entire life. In1954, Merle and family moved from Milwaukee, WI to Weston, MA. He worked as a salesman for the Albert Trestle Tanning Company and in 1960 he became a sales representative for the leather business until his retirement in 2005. In 2010 he came out retirement to work part time at Market Basket in Epping, NH until 2018. Merle will be remembered by so many for his friendly, gregarious personality. He enjoyed people and everyone who knew him, loved him. David said, “He was the best father a son could ever ask for through my entire life.” Merle loved his family and was so proud of each and every member. He loved spending time with his grandchildren watching movies, Patriot’s games, and having Sunday dinners. Left to cherish Merle’s memory are his son, David James and wife Karen Martin of Acton, MA, his grandchildren, Justin Goodwin of Newmarket, Kelly and Kevin Goodwin of Dover and Jennifer and Nick James of Winter Park, CO and his son-in-law, Arthur Goodwin of Newmarket. In addition to his beloved Charlotte, Merle was predeceased by his daughter, Nancy Goodwin, his sister Shirley Johnson and his brother, William James. Merle’s final wish is to say good-bye to everyone and to let them know he loved them all. Graveside services will be held at 12 pm on Saturday, February 29, 2020 at the Oaklawn Cemetery on Nason Rd. in Hampton Falls, NH. Please join us to celebrate a life that touched so many hearts. A life so beautifully lived deserves to be beautifully remembered. Family, friends, acquaintances, and co-workers are invited to share memories and stories of Merle’s amazing life. We will gather at The Stone Church Music Club, 5 Granite St.,in Newmarket on Sunday, March 29th from 1:00-4:00. If desired, memorial donations may be made to the American Cancer Society in honor of Nancy Goodwin or the Arthritis Foundation in honor of Charlotte James.

The family of Merle M. James created this Life Tributes page to make it easy to share your memories.

Send flowers to the James family.