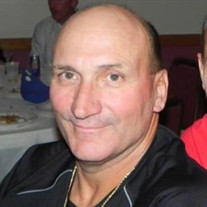 Seabrook – Michael C. Lannon, 65, of Seabrook, passed away peacefully at his home, on Monday, December 6, 2021 after a sudden illness. Mike was born on February 5, 1956 in Winchester, MA, a son of the late Thomas and Helen (Colarusso) Lannon. He shared nearly 20 years of marriage with his beloved wife, Mary Lou (Indigaro) Lannon of Seabrook. Mike was raised in Stoneham, MA and was a graduate of Stoneham High with the Class of 1974. He was painter by trade with Local Union 35 of Boston and was employed by John W. Egan Co. of West Newton for 18 years. He retired in 2019 and was able to spend time at his summer home on Frye Island in Lake Sebago, ME, a place he loved dearly. To say Mike was an avid Boston Bruins fan is an understatement. He also loved to cook, loved his family and was a staunch supporter of all the grandchildren’s hockey games. In addition to Mary Lou, Mike is survived by his children, Jennifer Bigelow and husband Brian of Cumberland, ME, Katie Shuler and husband Justin of Martinsville, VA, Melissa Pucillo and husband Rocco of Medford, MA and Michael Indigaro of Medford, MA and his grandchildren, Rocco, Tyler, Louis, Jackson and Barrett. He also leaves his brothers, Thomas Lannon of Litchfield, NH and Robert Lannon and wife Essie of Ft. Kent, ME, his sisters, Delores Mack of Gloucester, MA and Dianna Lannon of Signal Mountain, TN as well as many nieces, nephews, great nieces and great nephews. Services will be private. If desired, memorial donations may be made to The Jimmy Fund, Dana-Farber Cancer Institute, P.O. Box 849168, Boston, MA 02284-9168.

Seabrook &#8211; Michael C. Lannon, 65, of Seabrook, passed away peacefully at his home, on Monday, December 6, 2021 after a sudden illness. Mike was born on February 5, 1956 in Winchester, MA, a son of the late Thomas and Helen (Colarusso)... View Obituary & Service Information

The family of Michael C. Lannon created this Life Tributes page to make it easy to share your memories.

Send flowers to the Lannon family.