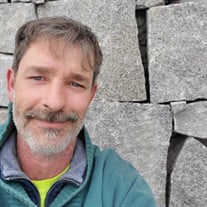 North Hampton – Michael Power Talty, 51, of North Hampton, passed away suddenly at his home on Wednesday, March 11, 2020. He was born in Lowell, MA on April 27, 1968, a son of Hubert Talty of Florida and the late Linda (St. Onge) MacDonald. Mike was raised in Westwood, MA and spent a large part of his life in the Ormond and Daytona, Florida area. He relocated to New England in the mid-1990s and settled in North Hampton. He was a very strong, hard-working man and a great provider for his family. He was a skilled stonemason by trade and worked as a self-employed contractor in Florida and New England. He was an artist in his trade and created many timeless memories through his work. He was a Ford man, a diehard Boston Bruins fan, enjoyed an occasional round of golf and couldn’t pass up anything chocolate. Mike was the type of guy that wanted to take care of everyone and gave freely of his time to assist those in-need. He was generous to fault and always on the look out to help, without agenda. He loved his animals and treated everyone like family, because to him, they were. Mike was the definition of courage. Fearless in life and in love, he made the most of everyday and had stories to prove it. What an entertainer he could be. In addition to his father, Mike leaves his longtime companion, Sylvia Cheever, of North Hampton, his son, Ian Talty, of North Hampton, his brother Hugh Talty of Hampton and his sister, Dyana Donaruma of Groton, MA. Due to the situation with the Coronavirus, services for Michael will be postponed until further notice and will be announced. Please check back for updates.

Due to the Coronavirus, all services are postponed please check back for updates.

Send flowers to the Talty family.