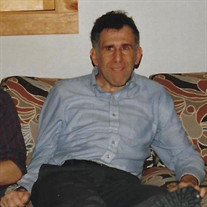 Portsmouth – Michael A. Wolfson, 81, passed away peacefully on Wednesday, May 13, 2020 at the Edgewood Centre of Portsmouth. He was born in New York City on May 19, 1938, a son of the late Aaron H. and Ida (Abrams) Wolfson and the stepson of the late Marjorie Wolfson. Michael spent his childhood in New York before leaving for college. He earned his Bachelor’s Degree from Harpur College of Arts and Sciences in Binghamton, NY and upon graduation, took a job with the Census Bureau in Washington, DC. Michael retired from the Census Bureau after nearly 40 years of service. In 2001 Michael moved to Massachusetts to be close to family and in 2011 moved to the Edgewood Centre in Portsmouth to be near his sister Marjorie and other family members. Michael was an exceptionally compassionate and generous man who lived every day of his life with integrity and kindness. The greatest joys in his life were his work and his family. Being born with cerebral palsy never held Michael back nor did it define him. Through determination and strength of will, Michael always found a way to achieve his goals. He loved his role as a valued member of his basketball team in DC and was an avid follower of all things political and cultural. Michael was also a self-avowed audiophile with an impressive sound system to show for it. Michael leaves his brothers, Graham Wolfson of South Salem, NY and Noel Wolfson of Lee, NH and his sisters, Marjorie Wolfson and her husband, Neil Slepian of Durham, NH and Ellen Palmer of East Greenwich, RI. He also leaves many nieces, nephews and cousins, including Lois Schwab, wife of the late Thomas Schwab and Robert Abrams and his wife Frances. Michael’s family would like to recognize the Edgewood Centre for the exceptional care and love provided during his 9 years in a place that he called “home.” Services will be private. The family suggests memorial donations to United Cerebral Palsy Association (UCP.org).

The family of Michael A. Wolfson created this Life Tributes page to make it easy to share your memories.

Portsmouth – Michael A. Wolfson, 81, passed away peacefully on...

Send flowers to the Wolfson family.