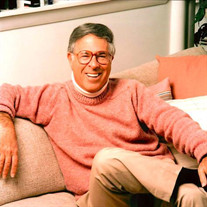 Exeter - Monroe Bernard Scharff peacefully sailed from this earth on November 20, 2019. “Monty” was born on September 8, 1923, in Boston, MA, the son of Bernard Wertheimer Scharff and Minette Switzer Scharff. Monty was a proud veteran of the greatest generation and served in the 8th Army-Air Force in World War II and in the Korean War, earning the rank of 1st lieutenant. As a graduate of Bard College/Columbia University, Monty pioneered the field of financial public and investor relations with the establishment of Monroe B. Scharff & Co. in 1958. He went on to a distinguished career of over 40 years serving institutional clients throughout the country from offices on 49th Street in New York, Los Angeles, Boston, and ultimately from his beloved home in Kennebunkport, Maine. The State of Maine held a special place in Monty’s heart where summered with his father and mother in Bridgton in the 1930s and ultimately lived full time in Kennebunkport with his beloved wife. Monty was married to Edwina K. Scharff for over 70 years, and always referred to her as “Blue Eyes.” Monty was a well-known member of the Kennebunkport community, where he could almost always be seen sailing his Cape Dory sloop “Windlass” in and out of the Kennebunk River, and holding court on all matters from the driver’s seat of his fire engine red Mazda Miata or the front steps of the post office. Monty loved sailing, skiing (his favorite ski areas being Shawnee Peak and Sunday River in Maine), cars, and most of all, people. He built his business and his personal life on integrity, a caring and generous attitude towards others, and an uncanny ability to relate with and ultimately charm those around him. Anyone who knew Monty would appreciate the phrase, “Let me tell you a quick story,” which would often be the start of a wonderful tale, transforming an ordinary event into a warm, hilarious adventure. Monty was a voracious reader, never seen without a book under his arm and always generous in offering his latest read to others. Most of all, Monty adored his wife Edwina, who survives him. He was a devoted and loving father to his two children, Peter B. Scharff and Stuart M. Scharff, who also survive him along with Peter’s wife Janet R. Scharff, Stuart’s wife Jodi B. Scharff, four grandchildren, Rachel, Christopher, Emily, and Jennifer, and two great grandchildren, Annabel and Caleb. Monty was generous with his time and expertise, formerly serving as a director-at-large of the National Investor Relations Institute (Boston Chapter), board member of Maine Capital Corporation, the Foundation for Blood Research, Portland Museum of Art, YMCA of Greater New York, and trustee of the Forman School in Litchfield, CT. The last months of Monty’s life were challenging for him and for those who loved and cared for him. The family would like to extend their heartfelt appreciation and thanks for the compassionate care, thoughtfulness, and loving attention Monty and the family received from all the wonderful staff at Riverwoods in Exeter, NH and the caregivers from Extended Family in Portsmouth. Please join us in celebration of Monty’s life on Saturday, December 7, 2019 at 11:30 a.m. at Riverwoods at Exeter, 5 Timber Lane, Exeter, NH. Monty’s family will share some brief reflections followed by light refreshments. One of the institutions closest to Monty’s heart was the Forman School in Litchfield, CT, where he attended as a young man after the death of his father when he was 16 years old. Monty credits the school and it’s then headmaster, John Forman, for so much of his instruction in “life.” In lieu of flowers, the family respectfully requests that donations to the Forman School be made in Monty’s honor. Fair winds and following seas Monty! The Forman School 12 Norfolk Rd. Litchfield, CT 06759

The family of Monroe B. Scharff created this Life Tributes page to make it easy to share your memories.