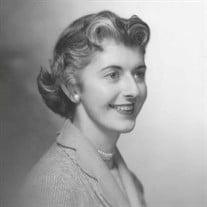 Portsmouth - Civic icon and cultural leader Nancy R. Beck, 92, passed away on Sunday, September 29, 2019. Nancy created projects that transformed Portsmouth from an industrial port into a vibrant historic and cultural destination. Her leadership and fundraising prowess led to the development of Strawbery Banke, the groundbreaking outdoor museum that has become the most popular historic attraction in the region. She was an early supporter of Theatre by The Sea, the first professional repertory theater in Northern New England, and renovated a vacant downtown warehouse on Bow Street into a popular theater venue. With her hand in dozens of civic initiatives from saving buildings across Portsmouth to the creation of the annual Prescott Park Arts Festival, Nancy leaves an indelible mark on the city she loved for over 60 years. Rescued from the rip tide of urban renewal beginning in the early 1960’s which leveled ageing neighborhoods across the country, Nancy and a group of local citizens were among the first to see value in the historic narrative of Portsmouth and move to preserve some of its most precious original buildings. Many structures in the North and South End and The Hill were saved and remain a vital part of the city’s fabric. The birth of Strawbery Banke heralded a new way to experience history - not as antiques frozen in time but as living environments linking past, present and future. Nancy became president of the Museum twice – two decades apart – and helped raise nearly $3.5 million to double the endowment and ensure its long-term success. Nancy was an original founding member of Theatre by the Sea in 1964 and raised the money to transform a waterfront warehouse into a dynamic 350-seat performance space. Renown for introducing bold work by emerging playwrights, the theatre presented plays such as Night, Mother and K2 next to classics such as West Side Story and Evita. Known today as the Seacoast Repertory Theatre, its stage continues to enthrall audiences with a full season of plays. A former Managing Editor of Atlantic Monthly magazine, Nancy was raised in Boston and graduated from Mount Holyoke and Harvard. She married Dr. Peter Beck of Portsmouth in 1959, moved to his Austin Street home and lost little time in engaging with the civic life of her adopted city. Her work spanned organizations such as Portsmouth Preservation Inc. and the Greater Piscataqua Community Foundation. Nancy was a relentless supporter of causes and individuals who had interest in building a better city. She would invite travelers, actors, merchant captains and the occasional political operative to stay in their home, creating a salon for exchanging ideas and seeking mutual understanding. What many now take for granted - that Portsmouth was always a beacon for the arts - greatly underappreciates the role of a handful of cultural pioneers who set about recasting the city’s persona. In an interview with the Portsmouth Herald, Nancy summed up her mission, “You can’t say everything is fine- it isn’t. You have to keep moving if you live in a community and want to contribute to it”. Nancy Beck is remembered for her roles in service to the arts, historic preservation and in celebrating Portsmouth’s great story. She has been honored with numerous awards including the Portsmouth Advocates’ Arthur J. Gerrier Award and the Rotary Award for Excellence in the Public Sector. In her passing she leaves generous donations to Strawbery Banke, Portsmouth Historical Society, Seacoast Science Center and the UNH Shoals Marine Lab. A celebration of Nancy’s life is scheduled for Friday, November 15, 2019 from 5:00 to 7:00 pm at the Strawbery Banke Visitors Center in Portsmouth. Family & friends may also visit facebook.com/nancy.reynolds.beck. In lieu of flowers, please send donations to the Seacoast Repertory Theatre.

The family of Nancy Reynolds Beck created this Life Tributes page to make it easy to share your memories.

Send flowers to the Beck family.