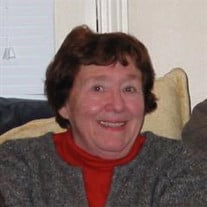 Rye Beach – Nancy Walker Burns, 83, of Rye Beach, died peacefully, Friday, December 11, 2015 at Portsmouth Regional Hospital in the company of her loving family. She was born in New York City, June 21, 1932 the daughter of the late Ralph Ernest and Nelle (Bass) Walker. She spent her early years in Chappaqua, NY, graduating from Horace Greeley High School. An honors graduate in history from Bucknell University, she devoted most of her professional life as a history teacher in New Jersey. Nancy later moved to Rye with her husband Robert, where she was a substitute teacher for several seacoast schools. Her deep interest in American history led her to be a museum teacher for Strawbery Banke and a guide at the Warner House and the John Paul Jones House. But her family was where her heart truly abided. She seemed to know everyone, talked often and endlessly to anyone and disliked no one. An early and ardent supporter of the Democratic Party, she volunteered for just about every candidate who called her into action. She was asked by John A. Durkin to serve as his proxy in facing down the NH Ballot Law Commission in the longest election recount and victory in the history of the US Senate. She liked to relate that her grandfather, an Episcopal priest, as a delegate to the Democratic Party Convention voted Al Smith to be the first Catholic nominee for the Presidency. She was active in the effort to return American prisoners of war from Vietnam. But caring for others was what she was best at, whether it was her direct family or a troubled runaway child some Franciscan Friar may have dropped on her doorstep. Committed always to her Christian calling and love of Christ, she was always aware of her religious heritage. God did not make two of her. Family members include her husband Robert Burns of Rye Beach; daughter Virginia Ann Steckowych and her husband Craig of Greenland; son Stephen Robert Burns and his wife Maura of Orlando, FL; grandchildren, Kathryn Steckowych of Warwick, RI, Matthew Steckowych of Portsmouth and Cameron Burns of Orlando, FL. In addition to her parents, she was predeceased by her daughter Karen Burns. A visiting hour will be held from 10 to 11 AM Tuesday, December 15, 2015 at the Christ Episcopal Church, 1035 Lafayette Road, Portsmouth. A service will immediately follow at 11 AM in the church. Burial will follow at Central Cemetery, Rye. Relatives and friends are respectfully invited. In lieu of flowers the family requests donation to the Christ Episcopal Church, 1035 Lafayette Road, Portsmouth, NH 03801.

The family of Nancy Walker Burns created this Life Tributes page to make it easy to share your memories.

Send flowers to the Burns family.