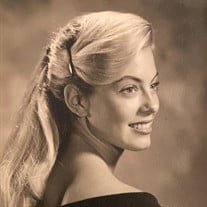 Rye Harbor — Nancy Naylor Valley, 72, of Rye Harbor, died on Sunday, May 3, 2020 at Portsmouth Hospital after a brief illness. Born August 1, 1947 in San Antonio, Texas, the daughter of the late Colonel Harold L. and Jane (Turner) Naylor, USAF, Retired, she was a 1965 graduate of Portsmouth High School, Miss New Hampshire in 1966, and in that same year a finalist and 4th runner up in the Atlantic City Miss America Pageant. Nancy’s dream of living all over the world was fulfilled. As a child she lived near Tokyo, Japan as her father was stationed there in the occupation following WWII. Later, as a young bride, she returned with her husband, Bruce, to the same area of Japan on Navy assignment during the Vietnam conflict. She also lived for three years in Naples, Italy, where she apprenticed in a Capodimonte porcelain studio and became the only American ever authorized to use the Neapolitan “N” and Crown trademark seal on her creations. The seal is a symbol of achieving master status in the art of porcelain sculpture. Her unique floral and tile porcelain designs have been displayed in museums, the White House., and in many private homes. Nancy enjoyed her many friends uncommonly. She loved people. Her kind, generous and thoughtful nature always shown through. She was luminous, a confident, gracious and serene woman lacking any trace of vanity. Participating in book clubs and knitting groups, she found fast friendships after a career with Motorola and a return in retirement to the New Hampshire seacoast. She is survived by her husband of 54 years, Bruce L. Valley, her brother, Steven L. Naylor and wife, Janis, of Bryant, Arkansas, two daughters: Noelle Valley Milam and husband, Thomas R. Milam, MD, and their four children, Mary Grace, Caroline, James and Wilson, all of Roanoke, Virginia; Christine Valley Marr and husband, David B. Marr, and their children, Max and Carson, of Vienna, Virginia. Her six grandchildren were always special, “the apple in Nancy’s eye." Due to pandemic restrictions, no funeral is planned at this time. A private burial will take place at a later time in the Rye Central Cemetery. There will be a Celebration of Life for Nancy’s family and many friends in mid-summer, possibly at the St. Andrews by the Sea Chapel in Rye Beach. Details forthcoming. Should friends desire, memorials in Nancy’s name may be made to the Rye Fire Department, 555 Washington Road, Rye, NH 03870, the Rye Public Library, 581 Washington Road, Rye, NH 03870, St. Andrews by the Sea Chapel, 30 Church Road, Rye, NH 03870, and the Loon Preservation Society, 183 Lees Mill Road, Moultonborough, NH 03254. Assistance with the arrangements was by the Remick & Gendron Funeral Home-Crematory, Hampton.

The family of Nancy N. Valley created this Life Tributes page to make it easy to share your memories.