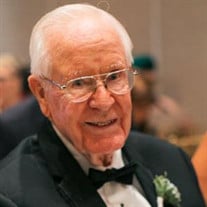 Greenland - Neill A. Williams, 91, of Greenland, passed away peacefully on January 7, 2021 at Portsmouth Regional Hospital following a brief illness. Neill was born on May 20, 1929, to Roy and Clara (Rose) Williams, in Duluth, Minnesota. He was raised in Duluth, and graduated from Duluth Central High School with the Class of 1948. Neill attended the University of Minnesota in Minneapolis prior to enlisting in the U.S. Navy in 1950. Neill served 20 years active duty in the Navy and was stationed in California, New Jersey, London, England, Rhode Island, Tennessee, Puerto Rico, Maine and finally Lakehurst, NJ, attaining the rank of Chief Aviation Electronics Technician. Following his active duty tenure, Neill transferred to the Naval Fleet Reserve, where he spent an additional 10 years on reserve status. He officially retired from his 30 years of naval service in 1980 with an Honorable Discharge. It was while Neill was stationed in London that he met his future wife Violet McIver, and they were married on October 20, 1954. Following his retirement from active duty, Neill worked as a manufacturing engineer in the electronic weapons industry for the US Army and US Navy departments. He retired from the weapons industry in 1990 after 20 years. In retirement, Neill worked as a real estate broker, and spent 13 years working for the NHDOT as a toll attendant. Neill became active in Lions Club International after moving to Portsmouth, NH in 1971. He joined the Portsmouth Lions Club in 1972, and worked tirelessly supporting the Lion’s mission. He was past president of the local club, and served as Zone Chairman and Cabinet Secretary for District 44H. Neill served as president of the NH Lions Sight and Hearing Foundation. In 1992 Neill became the District Governor of Lions district 44H, and had the honor of being installed at the Lions International Conference held in Hong Kong, China. Neill was also the recipient of the Melvin jones Award. Neill had a lifelong interest in being a ham operator since assembling a radio at age 13. He held a ham operator’s license for 73 years, and his call letters “K1YPM” were known by many fellow operators across the country. Neill was known to be up at 4:30 AM many mornings to connect and chat with his ham buddies. He was a member of the Portsmouth Radio Amateur Club, and served as vice president. Neill was a member of the Rye Congregational Church, and served on the Mission Committee and the Policy and By-Laws Committee. He was a proud member of Greenland’s Veteran’s Organization, and a member of American Legion Post 6. Neill is survived by his daughter Myra Fishbein and her husband James of Greenland, his son Allen Williams and his wife Ann of Manchester. He is further survived by grandchildren Jennifer (Ira) Lehrer of Greenland, Morgan (Greg) Henneman of Belair, MD, Jillian (Michael) Fishbein-Gibson of Hamden, CT and Harrison Williams of Manchester and great grandchildren Alec and Jack Lehrer, Avery and Caroline Henneman, and Charles and Crosby Gibson. He is also survived by several nieces and nephews. Neill was predeceased by his parents, his loving wife Violet, and his sisters Donna Isaccson and Janice Orlowski. Neill will be remembered as a man of utmost honesty and integrity, and a true gentleman. He had a profound love for his family and his country. Funeral services with military honors will be held at 1 P.M. Friday, June 4, 2021 at the New Hampshire State Veterans Cemetery in Boscawen. In Neill’s memory, donations may be made to the Lions Sight and Hearing Foundation of NH Inc P.O. Box 970, Concord, NH 03302-0970. Arrangements are by the Remick & Gendron Funeral Home-Crematory, Hampton.

Greenland - Neill A. Williams, 91, of Greenland, passed away peacefully on January 7, 2021 at Portsmouth Regional Hospital following a brief illness. Neill was born on May 20, 1929, to Roy and Clara (Rose) Williams, in Duluth, Minnesota. He... View Obituary & Service Information

The family of Neill A. Williams created this Life Tributes page to make it easy to share your memories.

Send flowers to the Williams family.