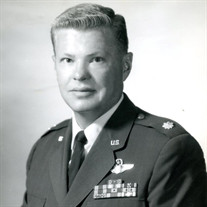 Hampton – Lt Col Nils Arthur Ohlson, Sr., USAF, Ret., 85, of Hampton, passed away peacefully at his home March 29, 2020 with loving family by his side. He was born in Dayton, OH on May 3,1934 to John Folke and Lillian (Christianson) Ohlson. The family relocated to Audubon, PA where they lived on 50 wooded acres. There, Nils and his father planted hundreds of trees. Nils attended Audubon School, Westtown School, West Chester, PA, and graduated from Norristown High School, Norristown, PA. In 2010, Nils was inducted into the Norristown High School Hall of Fame. Nils fell in love with flying when he first saw an airplane land near Audubon School. He couldn’t get out of school soon enough and ran to the airfield before the dismissal bell rang. Right then and there, he volunteered to mow the grass in exchange for flying lessons. He earned his pilot’s license before he earned his driver’s license. Nils served in the United States Air Force from 1955 to 1983 where he logged 6,123 hours in various aircraft platforms. He was proud of being a “Mustang,” a term for someone who has transitioned from the enlisted ranks to the officer corps. He was selected to demonstrate the USAF’s newest fighter-bomber, the FB-111, to the editors of Aviation Week and Space Technology (May 1976). One of his most significant accomplishments was saving a B-47 bomber aircraft from almost certain destruction after an engine failure on takeoff from Greenham Common Airbase, UK. The severity of the situation was compounded by the aircraft being loaded with a Mk6-Mod6 nuclear weapon. Nils flew B-52 bombers during three tours in Viet Nam, logging 697 combat flying hours during 91 combat missions with no aborts. During the Cuban Missile Crisis, Nils flew nuclear weapons on a B-47 to safety near Detroit Wayne International airport. He also served as Director of Simulator Training for FB-111s and KC-135s, Contingency Plan Officer, FB-111 Central Evaluation Group Pilot, Search and Rescue Officer over the area encompassing Greenland, Davis Straits, Iceland and the North Pole. He prosecuted four successful searches with personnel recoveries and no loss of life. Lt Col Ohlson retired from the USAF in July 1983 after 30 years of service. His awards include the Meritorious Service Medal, the Air Medal with three devices as well as many other personal and unit commendations. Nils was a member and volunteer for numerous organizations including the Military Officers Association of America, the Air Force Association, Daedalians, the New Hampshire Aviation Historical Society, American Legion and the 310th Bomb Wing Veterans Association and served in various leadership positions within those organizations including Chairman and Treasurer. Additionally, Nils was an Inland Search and Rescue Pilot for the Civil Air Patrol. After retirement from USAF, Nils completed his Bachelor of Professional Studies Degree at the University of New Hampshire. He also attended the North Bennett Street School, Boston, MA, to study period furniture building. He spent many hours restoring furniture and making new heirlooms in his workshop. He also built a nutshell pram at The Wooden Boat School in Maine and a Windsor chair at the Windsor Institute, Hampton, NH. Among his many passions and talents were photography, hi-fi stereo, boating, camping, cycling, woodworking, skiing, and music. He once commented that he could enjoy anything if “You’ll Never Walk Alone” was playing in the background. Nils had a thirst for knowledge. He was often spotted reading books, magazines, newspapers, articles, or spending time researching on the internet. He could have a lively educated discussion on nearly any subject. Although no longer on active duty, Nils remained an airman all his life. Nils knew kindness like an old friend. He was very proud of his family and circle of friends and loved them all fiercely; but he also treated strangers with tremendous kindness. From his taking in a foreign exchange student, to welcoming strays his son brought home for Thanksgiving dinners, his sense of humor made people laugh and his open heart and generosity always made everyone feel like part of the family. Whether he was creating, restoring, protecting, giving, or just flying, the sense of wonder and kindness that was part of his soul touched everything and everyone lucky enough to know him. He tried to leave the world a better place than he found it, and the world will not be the same without him in it. Nils is survived by his beloved wife of 55 years, Elsie Anne “Annie” (Gillispie) Ohlson, his devoted and loving son Nils A. Ohlson Jr.; sister Mareka Lee; nephews Mark Stephen (Anne),Orlando, Fl; Jonathan Lee; Tim Gillispie (Maria Francia), Overland Park, KS; nieces Joni Abbate (John), Hackettstown, NJ; Karin Lee; and several cousins. His charm, wit, and love will be missed by all who knew him. Services will be held at 11:00 am on Friday, October 22, 2021 at the Hampton United Methodist Church, 525 Lafayette Road, Hampton. Burial with full military honors will follow at 3 pm in the New Hampshire State Veterans Cemetery in Boscawen, NH. If desired donations may be made to Flight 53, Order of Daedalians, PO Box 8531, Portsmouth NH 03842-8531 or to the Hampton United Methodist Church, 525 Lafayette Rd., Hampton, NH 03842.