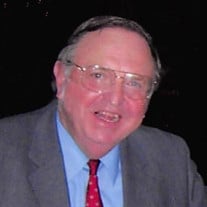 North Hampton – Norman F. Bolyea, PhD, 81, of North Hampton NH and Sarasota, FL, passed away peacefully at his home on Sunday, March 28, 2021 with his wife Sandra at his side. He was born in Haverhill, MA on July 8, 1939 the son of the late Horace and Eliza Dargie (Fyfe) Bolyea. Raised in Haverhill, he graduated from Haverhill High School with honors in the Class of 1957. He went on to receive his B.S. in Civil Engineering from Worcester Polytechnic Institute and later his M.S. in Management Engineering from Rensselaer Polytechnic Institute and his Ph.D. in Transportation Engineering from Rensselaer Polytechnic Institute. His graduate education was lined with many publications and awards, including; the Bedford Prize for high scholastic ability in engineering, the Burggraf Award presented by the Transportation Research Board as outstanding young author and presenter, and the Teetor Award presented to outstanding young educators in research. During Vietnam, he proudly served four plus years in the United States Air Force, reaching the rank of First Lieutenant. During his time in the Air Force, he served as Chief of Planning and Programing for the Minute Man Missile System base support facilities at Grand Forks AFB, Senior Design Engineer for the construction of facilities at Thule Air Force Base in Greenland and the Chief Project Engineer for the runway construction project at Suffolk County AFB in New York. In addition to being in charge of all engineering activities on that base, Norman received a Commendation Medal for outstanding performance of duties. Following his time in the service, Norman went on to have a successful career as an engineer, researcher, professor and entrepreneur. He first worked as an Assistant Traffic Engineer for the State Traffic Commission in Albany, NY, receiving his license to practice Professional Engineering in NY. He then transitioned to an Adjunct Assistant Professorship at Union College in Schenectady, NY where he presented graduate courses in various transportation systems. During this time, he also served as the Senior Staff Consultant for Computer Application Incorporated in Albany, NY, Chairman of the Interdisciplinary Transportation Program at Rensselaer Polytechnic Institute and as consultant for Creighton, Hamburg, Inc. His next stop was the University of Nebraska, where he developed a devotion to “Big Red” football. He was a tenured Associate Professor of Civil Engineering serving with the US Agency for International Development affiliated education services at the University of Kabul in Afghanistan, where he served as the Management and Engineering Advisor for the region. Returning to the States after Afghanistan, Norman made the New Hampshire Seacoast his home and accepted an Assistant Professorship at the University of Lowell. While teaching at Lowell, Norman initiated his entrepreneurial chapter, owning and operating several commercial real estate properties throughout the Seacoast including Kentville on the Ocean, Sea Spiral Suites, Ships Inn Resort and the Captain Morgan Inn. Norman was a lifelong member of his college fraternity, Phi Sigma Kappa and elected to the honorary Engineering brotherhood of the Alpha chapter of Epsilon Delta Sigma while at Rensselaer. He was also a member of multiple professional societies, including, the American Society of Civil Engineers, Transportation Research Board, Institute of Transportation Engineers, Society of Automotive Engineers, American Road Builders Association, American Society of Engineering Educators. Norman was also an active member of Hampton Beach Chamber of Commerce and Abenaqui County Club. An avid golfer in league play, he also enjoyed traveling the world with his wife, exploring museums and engineering sites. He cherished skeeball and his walks along the beach with his beloved Golden Retriever, Miss Maggie Mae. Norman is survived by his loving wife of 55 years, Sandra C. (Schliter) Bolyea also of North Hampton and Sarasota, whom he met while stationed at Grand Forks AFB in North Dakota. It was love at first sight and soon after they married and had their only child, the late Michelle L. Bolyea who predeceased them in 2013. Visitation will be held from 10 to 11:30 AM on Saturday, April 3, 2021 in the Remick & Gendron Funeral Home, 811 Lafayette Road, Hampton. Burial will be private. In lieu of flowers, donations may be made to a charity of one’s choice.

The family of Norman Fyfe Bolyea created this Life Tributes page to make it easy to share your memories.

Send flowers to the Bolyea family.