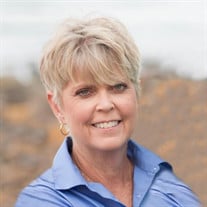 Barrington – Pamela L. Saunders, 54, a longtime resident of Hampton, passed away peacefully at her home in Barrington, NH on Monday evening, June 28, 2021. She was surrounded by her husband and three children at the end of her courageous 3-1/2 year battle with Neuroendocrine Cancer. Pam was born in Riverhead, NY on December 23, 1966, the daughter of Bill and Kathy Trotman. Her family relocated to Hampton in 1976 where Pam attended Sacred Heart School and Winnacunnet High School. She met Kevin, the love of her life, Sophomore year in high school and they went on to build a beautiful life together. Pam received her Bachelor’s Degree in Business (Fashion Merchandising) from Rivier University in Nashua, NH in 1989. Pam and Kevin were married in 1989 and ventured from the seacoast to Chicago and Milwaukee. Pam was employed by Kmart Apparel Corporation and Graybar Electric during the years away from New Hampshire. In 1993, they returned to Hampton to be closer to family, and to start a family of their own. Pam became a full-time mother to Anna and Christopher in 1995 and Wil in 1998. Her children were her pride and joy. It was the role she was meant to play and she raised three wonderful children. In 2005, with the kids in school, Pam played a pivotal role in starting a business with her husband representing electrical manufacturers in New England. Pam thrived on providing friendly and knowledgeable customer service from their office in Hampton. Pam later joined The Galley Hatch Restaurant in Hampton, ultimately fulfilling the role of Bakery Manager at Kay’s Café. The Galley Hatch was her extended family, and she loved the connection it provided to the seacoast community. Her cancer diagnosis in early 2018 was clearly a life altering moment. After the disappointment and distress of learning of her condition, Pam rose to become her own best advocate in her battle against the disease. Pam researched tirelessly and her doctors often commented about how well versed she was in the various treatment options they discussed. Pam found success at Ochsner’s Neuroendocrine Tumor Clinic in Kenner, LA and for 5 months in late 2019 was cancer free. She traveled widely in search of treatment and always stopped to appreciate those she met along the way. Throughout her life, her faith was her foundation. Pam was a communicant, and served as a Eucharistic Minister, at Saint Theresa Parish, Rye Beach, NH. Pam is survived by her husband, Kevin, her parents Bill and Kathy Trotman (Hampton), by her children, Anna, Chris and Wil, her daughter’s boyfriend Troy Collins, and by her sisters and their husbands Tracy and John Kelly (Hampton) and Kim and Brian Kubit (Pelham). She will be dearly missed by her in-laws, Lee and Mary Eileen Saunders (North Hampton), Mark and Mary Saunders (Stratham), Brian and Jennifer Saunders (So. Portland, ME), Erin and Adam Braunstein (Thorton, CO), and Jennifer and Matt Burgeson (North Hampton), along with many nieces and nephews. Pam was also very grateful for the support during her cancer battle to her aunt and uncle Carol and Bob Triggs, and their children, Pam’s cousins, John and KeKe. Her beloved Labrador retrievers Rory, Jet, and Ruby will miss her very much as well. Visiting hours will be from 4 to 7 PM on Tuesday, July 6, 2021 in the Remick & Gendron Funeral Home – Cremator, 811 Lafayette Rd., Hampton. A Mass of Christian Burial will be celebrated at 11 AM on Wednesday at the St. Theresa Parish Church, 815 Central Rd., Rye Beach. Burial will be in Center Cemetery, North Hampton.

Barrington &#8211; Pamela L. Saunders, 54, a longtime resident of Hampton, passed away peacefully at her home in Barrington, NH on Monday evening, June 28, 2021. She was surrounded by her husband and three children at the end of her courageous... View Obituary & Service Information

The family of Pamela L. Saunders created this Life Tributes page to make it easy to share your memories.

Send flowers to the Saunders family.