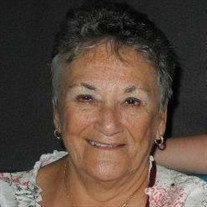 The Villages, FL - Patricia H. Davis, 75, died peacefully surrounded by family on Tuesday June 13, 2017 at Cornerstone Hospice & Palliative Care after a long battle with cancer. Pat was born on March 15, 1942 in Boston, Mass., the daughter of the late Joseph and Evelyn Dostie. She attended and graduated Roxbury Memorial High School, with the Class of 1959. On January 14, 1962, Patricia married Walter L. Davis in St. Patrick’s Church in Roxbury, Mass. They settled in Quincy, Mass. and then Weymouth, Mass. and started their family. Patricia worked evenings for State Street Bank for a number of years so she could be home with her children during the day. She was a loving wife and mother. In 1980, they relocated to Hampton, NH where she worked at Hampton National Bank. She was very involved at Our Lady of Miraculous Medal Church, as a Eucharistic Minister, bible study and the Catholic Women’s Club. In their retirement years, Patricia and Walt moved to The Villages, and had the time of the lives. They were very involved in golf, square dancing club, shuffleboard club, New Hampshire Club and cards and met many treasured friends. She is survived by her husband Walter, her daughters, Lisa Lavoie and her husband Dale of The Villages, Susan Albert and her husband Kenneth of Eliot, ME, Robin Arsenault and her husband Matthew of North Hampton, NH and Jennifer Squires and her husband Derek of Winthrop, ME, ten grandchildren, Eric, Lauren, Ethan, Davis, Caraline, Nathan, Nicholas, Nicole, Elisha and Brandi; two brothers, Dick Natola and his wife Betty and Donald Dostie and his wife Eileen, two sisters Shirley Pelton and her husband Bud and Beverly Brienzia and her husband Dickie and many nieces and nephews. She was preceded in death by her infant daughter, Mellisa, her parents, and seven siblings: Joseph Mulligan, Mildred Daggett, Charles Barthelemy, Evelyn Storts, Virginia Bechtol, Joseph Dostie, and Doris Reffitt. Visiting hours will be from 2-4 and 6-8 P.M. Tuesday, June 20, 2017 at the Remick & Gendron Funeral Home-Crematory, 811 Lafayette Road, Hampton, NH. A mass of Christian burial will be celebrated at 10 A.M. Wednesday, June 21, 2017 at Our Lady of the Miraculous Medal Church, 289 Lafayette Road, Hampton, NH. Burial will be in the Village Cemetery, Weymouth, Mass.In lieu of flowers, donations may be made to Cornerstone Hospice Palliative Care Foundatiuon, 601 Casa Bella, The Villages, FL 32162-3640.

The family of Patricia H. Davis created this Life Tributes page to make it easy to share your memories.