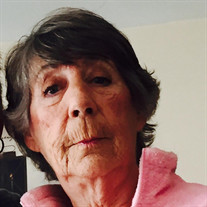 Hampton – Patricia Rose “Patty” Dunham, 77, of Hampton passed away peacefully on Wednesday, July 12, 2017 at the Exeter Hospital with her devoted and loving family by her bedside. She was born in the United Kingdom on April 5, 1940, a daughter of the late Arthur and Katherine (Lanigan) Hall. Pat was raised just outside London, England and enlisted in the British Navy shortly after high school. She met the love of her life, Edward A. Dunham, at RAF Mildenhall where Ed was stationed with the United States Air Force. They were married in 1961, returned to the United States and after living on Pease AFB in Newington, moved to Exeter for a short time and eventually settled in Hampton. Pat lived in that same home in Hampton up until the time of her death. She and Ed owned and operated the Gondolier Pizza Restaurant at the end of Tower Drive in Hampton in the late 1960s and the Donut & Deli and Salty’ s Lobster Pound at Hampton Beach in the 1990s. She also waitressed at a number of local favorites including Bailey’s, Kennedy’s, Hector’s Country Kitchen and Marty’s Steakhouse. After Ed’s death in 1997, Pat retired and enjoyed her time being a grandmother and watching over her 10 grandchildren and 7 great grandchildren, a job she thoroughly treasured. Pat was a faithful communicant of Our Lady of the Miraculous Medal Church in Hampton and served her church in many facets over the years. She is survived by her daughters, Terry Boyd and her husband Richard of Fremont and Joanne Fahey and her husband Jeff of Hampton and her sons, Kenneth Dunham and his wife Barbara of Brentwood and Michael Dunham and his wife Cathy of Hampton. She also leaves her grandchildren: Alicia, Stephanie, Ashley, Taylor, Zackary, Richard, Catherine, Eric, Shane and Ciera, her great grandchildren: Noah, Natalie, Crendall, Tucker, Brayden, Adalyn and Lillian and her siblings, Kenneth Hall, Pauline Moore and Delia Brazier all of England. Family and friends may visit from 5 to 7 PM on Monday, July 17, 2017 in the Remick & Gendron Funeral Home – Crematory, 811 Lafayette Rd., Hampton. Services will follow the visitation starting at 7 PM in the funeral home. In lieu of flowers, memorial donations may be made to the Alzheimer’s Association, 166 South River Road, Suite 210, Bedford, NH 03110.

Hampton &#8211; Patricia Rose &#8220;Patty&#8221; Dunham, 77, of Hampton passed away peacefully on Wednesday, July 12, 2017 at the Exeter Hospital with her devoted and loving family by her bedside. She was born in the United Kingdom on April... View Obituary & Service Information

The family of Patricia R. "Patty" Dunham created this Life Tributes page to make it easy to share your memories.

Send flowers to the Dunham family.