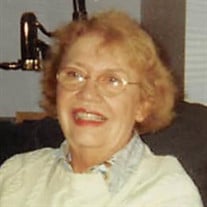 Salem - Patricia A. Fay, EdD, RN, Professor Emerita, Saint Anselm College, 85, of Salem, passed away peacefully on Sunday, October 11, 2020. She was born in Lawrence, MA on August 3, 1935 the daughter of the late John and Grace (Fitzgerald) Kerton. She graduated from St. Mary's High School and Catherine Laboure School of Nursing in Dorchester, MA. She also received both baccalaureate and master’s degrees from Boston College School of Nursing. In addition she received a doctorate in Higher Education Administration from Vanderbilt University. Patricia held several nursing positions in both the Boston and Lawrence areas. In 1974 she was invited to join the nursing faculty at Saint Anselm College in Manchester. She served in various capacities at the College for 25 years. During her last 12 years at the College she served as Director of the Continuing Nursing Education Program. She was actively involved in several professional nursing organizations. She shared 58 years of marriage with late husband, Philip Fay who predeceased her in 2019. Surviving family members include her children, John Fay and his wife Kate of Stratham, Peter Fay and his wife Barbara of Barrington and Marianne Fay of Salem, MA; brother, Robert Kerton and his wife Judy of Hampton; sister-in-law, Susan Fay-Ryan of Florida and grandchildren, Nick and Matt Fay, Sean and Kerri Richards, Ciara Fay and Jared Bertone. In addition to her parents and husband she was predeceased by her grandson, Joseph Fay. Visiting hours will be held from 10 AM – 12 PM on Thursday, October 15, 2020 in the Remick & Gendron Funeral Home-Crematory, 811 Lafayette Road, Hampton. Services will immediately follow at 12 PM in the funeral home. Relatives and friends are respectfully invited. In lieu of flowers, memorial contributions may be made to the Geisel Library, Nursing Collection, Saint Anselm College, 100 Saint Anselm Drive, Manchester, NH 03102.

Salem - Patricia A. Fay, EdD, RN, Professor Emerita, Saint Anselm College, 85, of Salem, passed away peacefully on Sunday, October 11, 2020. She was born in Lawrence, MA on August 3, 1935 the daughter of the late John and Grace (Fitzgerald)... View Obituary & Service Information

The family of Patricia A. Fay created this Life Tributes page to make it easy to share your memories.

Send flowers to the Fay family.