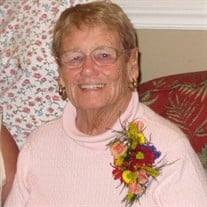 Patricia Parker Mitchell Hampton, NH – Patricia M. Parker Mitchell, 86, of Hampton, died Wednesday, December 30, 2015 at Partridge House in Hampton. She was born in Haverhill, MA September 22, 1929 a daughter of the late Harold and Etta (Cole) McCormick. Patricia grew up in Georgetown, MA and was a graduate of Perley High School in Georgetown. Patricia worked for 38 years at Bell Telephone in Haverhill, Salisbury and Newburyport, MA before retiring in 1986. She later volunteered for a number of years with the Granite State Ambassadors at the Manchester-Boston Regional Airport and the Aviation Museum of New Hampshire in Manchester. Pat enjoyed traveling, especially along the coast and through the mountains. She was an avid reader, and kept up with current events. She was active in the Amoskeag Strummers of Manchester, in which her late husband, Wallace Mitchell, played tuba. Family members include her daughter Susan P. Coryell and Susan's husband Bruce of Downingtown, PA; step children, David Mitchell of Oreland, PA, Virginia Jennings of Marietta, GA, Peggy Wilkinson of Somerset, OH; brothers, Michael McComick and his wife Katie of Eagle River, AK and John McCormick of Syracuse, NY,; 8 grandchildren; 4 great-grandchildren; former husband Edward Parker, Jr. of Groveland, MA; several nieces and nephews and many dear friends. In addition to her parents and husband she was predeceased by her brother James McCormick and sister Rae Howell. A memorial service will be held 10:30 am Saturday, January 9, 2016 at St. James Episcopal Church, 119 Washington Street, Groveland, MA. Relatives and friends are respectfully invited. Interment will be held at a later date at the NH Veterans Cemetery, Boscawen, NH. In lieu of flowers, the family requests donations be made to the First Baptist Church of Hampton food pantry, 36 Winnacunnet Road, Hampton, NH 03842.

The family of Patricia Parker Mitchell created this Life Tributes page to make it easy to share your memories.