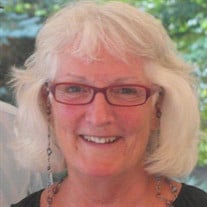 Rye - A beacon in the Seacoast of New Hampshire was recently extinguished. Patricia “Tricia” Quinn, 69, a wife, mother and public servant who was the bright light of her marriage, family and community, passed peacefully into the loving arms of Our Lord on Thursday morning, November 17, 2016 at Portsmouth Hospital. After a short but tenacious bout with cancer, she died in the loving embrace of her family and relatives who kept vigil during her final hours. Tricia was born in Frederick, Maryland on September 9, 1947 to Philip N. and Mary Francis (Croghan) Rebert. She grew up in this Maryland community and attended local Catholic schools. Following high school, she attended secretarial school, as well as Frederick Community College, achieving her AA degree in business. She worked for the Selective Security Administration prior to her 1971 marriage to Jeffrey A. Quinn of Mt. Airy, Maryland. In 1974, Tricia relocated with her husband to the New Hampshire seacoast community of Rye to live and raise their family near the Atlantic Ocean. She is survived by her husband and their six children; Briony Rebecca and her son, Donovan Quinn Tait (Bethesda, MD), Colleen Frances, Sarah Elizabeth, Patrick Croghan and his wife, Caitlin Delaney, and their daughter, Josephine Delaney Quinn (Rye), Anne Catherine (Washington, DC) and Molly Maureen (Rye). While raising a large family, Tricia became the surrogate mother for many neighborhood children. Her home was an informal day-care/ safe place for many families in Rye. The Cable Road home was a hub of activity in the neighborhood through many formative years of local children. Many childhood memories of a warm, receptive household were made at the hands of this loving mother and caregiver. In 1984, she returned to the workforce as an assistant to the Religious Education Director at St. Theresa Parish in Rye Beach. In 1986, Tricia began her 30- year career at the Rye Public Library. She joined as a part-time library aide and eventually became the Assistant Director, the position she held at the time of her death. Throughout her years in the library field, Tricia attended countless professional development and continuing education workshops, seminars and conferences. Tricia served as a member of the New Hampshire Library Association/READS (Reference and Adult Services) Division for many years and was nominated for the NHLA/READS Award of Excellence in 2013. In 2014, she graduated with the Leadership Seacoast Class, which involved investigating regional and community issues, challenging personal assumptions about those issues, and exploring personal opportunities for involvement and leadership. She led a popular Rye Library Book Club for several years, engaging several in the joy of reading and the sharing with one another. In May of this year, Tricia led the Library and Town of Rye’s cooperative One Town/One Book celebration, aiming to bring together as many community members as possible in reading and discussing one book selection. In the end, this project involved over 300 readers. Her dedication to the library profession and the community of Rye were evident not only in the many certificates she accumulated through her ongoing development, but in the respect and friendship she engendered among her colleagues and patrons. Tricia was a founding member of the Rye Senior SERVE community organization. Her outreach and innate abilities of organization made her integral in the success of this non-profit effort. She is beloved by those with whom she interacted on a daily basis and the many elderly Rye citizens who benefited from her service. She was a champion of many; a truly giving, cheerful, community-minded individual. She possessed a welcoming attitude and warmth to all she encountered. Tricia’s family and relatives will greet friends and acquaintances at the Remick & Gendron Funeral Home in Hampton, New Hampshire from the hours of 4pm-7pm on Monday, November 21, 2016. A Mass celebration of her life will take place on Tuesday, November 22, 2016 at St. Theresa Parish in Rye Beach, NH at 10:30 am. In lieu of flowers, donations can be made in Tricia's name to Rye Senior SERVE, Inc. PO Box 902, Rye, NH 03870 for the benefit of the elderly needs of our community.

Rye - A beacon in the Seacoast of New Hampshire was recently extinguished. Patricia &#8220;Tricia&#8221; Quinn, 69, a wife, mother and public servant who was the bright light of her marriage, family and community, passed peacefully into the... View Obituary & Service Information

The family of Patricia R. Quinn created this Life Tributes page to make it easy to share your memories.

Rye - A beacon in the Seacoast of New Hampshire was recently...

Send flowers to the Quinn family.