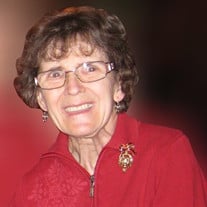 Exeter – Patricia Anne Sprague, 76, passed away Thursday, March 23, 2017, at Edgewood Centre, in Portsmouth. Patricia was born April 9, 1940 in Rochester, NY, the daughter of the late John H. and Helen (Curtis) Smith. Patricia fought a long, courageous battle with Parkinson’s disease. She passed away peacefully, surrounded by her children. Patty was raised in Rochester, NY and graduated from Monroe High School in 1958. She received her bachelor and master degrees in Elementary Education from Fredonia State College in Fredonia, NY. Patricia and her husband Gary were married August 11, 1962 and shared 53 years of marriage. Patty and Gary resided in Collins, N.Y. for 51 years before moving to Exeter, NH in 2012 to be closer to family. Patty began her teaching career in 1962 at Gowanda Elementary School and taught for four years. She then took a ten year leave to raise her three children. Patty returned to GES in 1976 as the Director of a federally funded program titled Handicapped Assistance for Pre-Primer Youngsters. The following year she taught sixth grade before teaching second grade for the next 22 years. She retired in June, 2000. Patty was a very active member of the Gowanda Presbyterian Church, serving as an Elder, as well as a choir member. She and her husband, Gary, enjoyed their hobby of breeding, raising, and showing English springer spaniel dogs. Patty also loved doing needlepoint, reading, and spending time with her children and grandchildren. Her family was her whole world. Patty leaves three children, Lindsey Mantell and her husband, Michael, of Exeter, NH, Amy Patmore and her husband, Barry, of Spencerport, NY, Scott Sprague and his wife, Nicole, of Brentwood, NH, seven grandchildren, Megan, Brendan, Brett, Brian, Zachary, Makayla, and Emmalynn. She also leaves her sister, Elizabeth Savage, of Gainesville, FL, her sister-in-law, Suzanne Sweeney, and her husband, Ron, of Plymouth, MA, many nieces and nephews, and many dear colleagues and friends. Services will be held on Thursday, March 30, 2017, at 10:00 A.M. at Langdon Place of Exeter, 17 Hampton Road, Exeter, NH. Relatives and friends are respectively invited. In lieu of flowers, donations may be made to the Michael J. Fox Foundation for Parkinson’s Research online at www.michaeljfox.org, by phone at 1-800-708-7644, or by mailing a donation by mail to Donation Processing, The Michael J. Fox Foundation, P.O. Box 5014, Hagerstown, MD 21741-5014.

The family of Patricia Anne Sprague created this Life Tributes page to make it easy to share your memories.

Send flowers to the Sprague family.