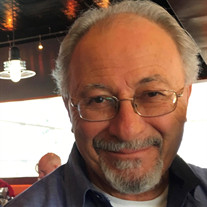 Hampton, NH – Patrick M. D’Agostino, 73, passed away, December 25, 2020 at Massachusetts General Hospital in Boston after a lengthy illness. He was born in Boston on November 29, 1947 and was the son of the late Pasquale and Philomena (Ferullo) D’Agostino. Patrick was raised in Belmont, MA. He graduated from Belmont High School and received his Bachelor’s degree from Bentley University. Patrick worked in the healthcare industry with a focus on home health staffing and the management of dialysis centers. He was most recently employed by DaVita Inc. and was living in Hampton, NH since 2006 where he was enjoying his retirement. He was a loving husband, father, and grandfather, leaving behind: his wife Ana M. (DaSilva) D’Agostino of Hampton, three children, Lori D’Agostino of Edgartown, MA, Michael D’Agostino of Groton, MA, Marc D’Agostino of Philadelphia, PA, the mother of his children Joanne (Bourgeois) D’Agostino of Groton, MA, two stepchildren Jason Faria of Exeter, Brad Faria of Epping, and seven grandchildren. Private services will be held at the convenience of the family. In lieu of traditional remembrances donations may be made to the Leukemia and Lymphoma Society Arrangements are by the Remick & Gendron Funeral Home-Crematory, Hampton

Hampton, NH &#8211; Patrick M. D&#8217;Agostino, 73, passed away, December 25, 2020 at Massachusetts General Hospital in Boston after a lengthy illness. He was born in Boston on November 29, 1947 and was the son of the late Pasquale and Philomena... View Obituary & Service Information

The family of Patrick M. D'Agostino created this Life Tributes page to make it easy to share your memories.

Send flowers to the D'Agostino family.