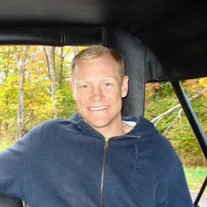 Rye – It is with great sadness that the family of Patrick Allan Mulvey announces his passing on March 7, 2018, at the age of 40. He was born August 21, 1977, in Dover, New Hampshire, the beloved first born child of Bill and Judy (Bishop) Mulvey. In 1981, he became a big brother to Breanne and in 1983 he became a big brother again to Brett. As big brother, Patrick made sure his siblings knew who was in charge of the television remote, how to shoot a basketball and most importantly how much he loved them. As a youth, Patrick could be found playing every sport with a ball. He was a four sport varsity athlete in high school, exceling in football, basketball, baseball, and track. Patrick was the captain of the football, basketball, and track teams. He earned the most valuable player awards for the basketball and track teams, winning the state high jump championship his senior year. He went on to play college basketball at Amherst College. Patrick attended Rye Elementary and Middle Schools. He was a graduate of Saint Thomas Aquinas High School, Phillips Exeter Academy (post graduate year), Amherst College, and California Western School of Law, where he was a Justice Kennedy Legal Scholar. He started his legal career at the International law firm of Paul, Weiss, Rifkind at their New York, NY offices. Patrick returned to his hometown of Rye, New Hampshire to be near his family and friends, at which time he joined his father’s Portsmouth law firm. He later became a partner at the firm now known as Mulvey, Cornell and Mulvey. Patrick met the love of his life, Lea Anne Henschke, in 2005 and their adventures began. They were married in 2009. In 2011, Patrick and Lea Anne started their family and became loving parents to Lily. In 2013, Guinevere was born, and in 2015, Seamus was born. Patrick loved to do everything with his family, from hiking in the mountains to spending endless hours at the beach. Patrick was an incredibly loving person who was loved, will be missed, and will always be cherished. Patrick is survived by his wife, Lea Anne (Henschke) Mulvey; children, Lily, Guinevere, and Seamus Mulvey. Besides his wife and children, Patrick leaves behind his parents, Bill and Judy Mulvey; sister and brother-in-law, Breanne and Garrett Moore; brother and sister-in-law, Brett and Courtney Mulvey; grandmother, Ann Bishop; uncles and aunts, Tom and Diane Mulvey, Jim and Binny Mulvey, Joe O’Brien, Cathy Mulvey and Sam Torrey, Jay Bishop, and Allan and Tricia Bishop; father-in-law and mother-in-law, Mark and Patricia Henschke; sister-in-law and brother-in-law, Cortney and Christoph Hamman; sister-in-law, Morgan Henschke; brothers-in-law, J.R. Henschke and Taylor Henschke; nieces, Avery Mulvey, Kaelyn Moore, and Audrey Moore; nephews, Cruz Hamman and Parker Hamman; as well as devoted cousins and friends. He was predeceased in death by grandparents William and Susan Mulvey; grandfather Allan R. Bishop; Aunt Susan (Mulvey) O’Brien; Uncle Henry and Aunt Dolly Mulvey. Visiting hours will be from 4-7 pm Thursday, March 15, 2018 at the Remick & Gendron Funeral Home-Crematory, 811 Lafayette Road, Hampton. A liturgy of the word service will be celebrated at 11 A.M. Friday, March 16, 2018 at Saint Theresa Church, 815 Central Road, Rye Beach. Relatives and friends are respectfully invited. In lieu of flowers and in honor of Patrick's legacy, the family requests donations to the Mulvey Children's College Fund, c/o Newburyport Five Cents Savings Bank, 1390B Lafayette Road, Portsmouth, NH 03801. The fund has been established for Lily, Guinevere, and Seamus.

Rye &#8211; It is with great sadness that the family of Patrick Allan Mulvey announces his passing on March 7, 2018, at the age of 40. He was born August 21, 1977, in Dover, New Hampshire, the beloved first born child of Bill and Judy (Bishop)... View Obituary & Service Information

The family of Patrick A. Mulvey created this Life Tributes page to make it easy to share your memories.

Rye – It is with great sadness that the family of Patrick Allan...