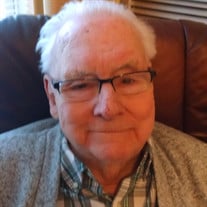 Portsmouth – Paul “Bud” Wilson Adams, 93, a former longtime resident of 27 Mary Batchelder Road in Hampton, Chatham MA, and Exeter, died peacefully on Sunday, April 16, 2017 at Wentworth Senior Living in Portsmouth where he had resided for the past 4 years. He was born on December 6, 1923 the son of the late Paul and Almeda (Wilson) Adams. Raised in Amesbury, MA he graduated from Amesbury High School with the Class of 1942. Following graduation he enlisted in the Army Air Corps and trained as a P-47 maintenance specialist in Long Island, NY. From there he served two and half years, seeing action in the European Theater and North African Campaign as a P-51 Crew Chief. Returning home from the service Mr. Adams became a machinist first working at the former Bailey Corp. in Seabrook and then various other companies before settling at the former GTE in Greenland, where he retired as a draftsman in 1986 after 15 plus years. Paul loved life and he lived it to the fullest. He enjoyed traveling and spending time with family and friends. He was also very involved in the Hampton Youth Association and an avid New England sports fan, who especially loved the New England Patriots, Boston College, and UNH football teams. He shared 67 years of marriage with his late wife Ruth (Kershaw) Adams who predeceased him in 2015. Surviving family members include his sons, Dean Adams and his wife Debra of Newmarket, Lee Adams and his wife Deborah of Rye; 9 grandchildren; 17 great grandchildren and several nieces, nephews and cousins. In addition to his parents and wife, he was predeceased by his sister Frances Louise Adams and son Brian Adams Visitation will be held from 6 to 8 PM on Friday, April, 28th, 2017 in the Remick & Gendron Funeral Home - Crematory, 811 Lafayette Road, Hampton. Burial will take place at 1 PM on Saturday, April, 29th, 2017 in the High Street Cemetery. Relatives and friends are respectfully invited.

The family of Paul "Bud" Wilson Adams created this Life Tributes page to make it easy to share your memories.

Send flowers to the Adams family.