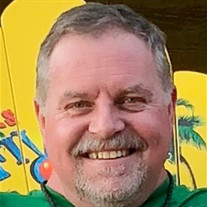 Nottingham – Paul D. Comeau, 58, of Nottingham, passed away unexpectedly at his home on January 11, 2019. He was born in Everett, MA, June 28th,1960, son of the late Matthew and Arlene (Hirtle) Comeau, and was raised in Salisbury, MA. Paul graduated from Triton Regional High School in Byfied, MA with the Class of 1978. He later received his Associates degree from the University System of New Hampshire. He presently held the position of Director of Hockey Operations for New Hampshire East Youth Hockey Association (NHEYA) and that of President of New Hampshire Amateur Hockey Association (NHAHA). Prior to that, Paul was a board member and President of NHE Hockey. Paul had been employed by the Exeter, NH Police Department from 1984 until 1992, retiring as a Sergeant. Paul called Nottingham home since 2003, after living in Hampton since 1985. He shared thirty five years of marriage with his loving wife Robin (Stoddard) Comeau. They raised three sons: Matthew, Eric and Anthony. In addition to his wife and three sons, family members include his brother, Stephen Comeau of Ruther Glen, VA, mother in law Carol Stoddard, brother in law Steven Stoddard, sister in law’s Jill Stoddard, MaryAnn Stoddard and Diana Stoddard. In addition to family previously noted, Paul also had many nieces and nephews, including Cameron and Devin Stoddard, Ashley and Erin Bartolome, Jamie Sigmund and Francesca Evans. He was predeceased by two brothers, Michael and Lawrence Comeau. An avid hockey fan, Paul coached youth hockey for nearly thirty years on the Seacoast. He relished the relationships that he made during his time as a coach and mentor, including the time spent as a member of NHEYA and NHAHA. Paul was committed to promoting the sport of hockey and worked diligently to keep the sport affordable to all households. He had a tremendous impact on the lives of many local hockey players, parents and coaches and will be sorely missed. A Celebration of Life will be held from 1 pm to 5 pm Saturday, March 9th, 2019 at the Sheraton Portsmouth Harborside Hotel, 250 Market Street, Portsmouth. Relatives and friends are respectfully invited. In lieu of flowers, the family requests that donations be made to the Paul Comeau Memorial Fund c/o NH East Youth Hockey, PO Box 2406, Concord, NH 03302-2406. The fund will provide equipment and tuition assistance to local youth hockey players.

The family of Paul D. Comeau created this Life Tributes page to make it easy to share your memories.