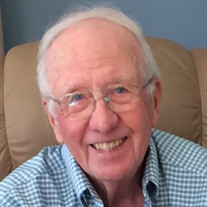 Tuftonboro, NH - Paul H. Kelleher, 91, of Tuftonboro, passed on August 7, 2021 surrounded by his family, after a brief period of declining health. He was born in Newburyport, MA on September 20, 1929, the youngest child of Neil T. and Lillian M. Kelleher. He was predeceased in 2013 by Peg, his wonderful wife of 62 years. Paul was a resident of North Hampton for 42 years before moving to Tuftonboro in 1998. Most of his sales career was spent with Prudential, who honored him with their Community Service Award. He was active on multiple boards and committees during his time in North Hampton and Tuftonboro. He enjoyed life to the fullest. Woodworking, gardening, antiques and volunteering were just a few of his many interests. He was never idle. Paul traveled extensively, with trips throughout the US, Canada, Europe and the Caribbean. Most memorable were a month spent in New Zealand and a three week journey across Route 66 with his son for his 85th birthday. Paul had a deep seated love for agriculture, especially fairs and auctions. He enjoyed time in both his flower and vegetable gardens. His greatest satisfaction was time spent with family. He was always helping others, even as his health was failing. He is survived by his three children, Craig and Laurie Kelleher, both of North Hampton, and Beth Kelleher of Keene, along with his devoted companion Joan Garand of Newburyport, MA. In lieu of flowers and donations, Paul requests to do something nice for someone less fortunate. A private service for the family will be held at a later date. Arrangements are by the Remick & Gendron Funeral Home-Crematory, Hampton.

Tuftonboro, NH - Paul H. Kelleher, 91, of Tuftonboro, passed on August 7, 2021 surrounded by his family, after a brief period of declining health. He was born in Newburyport, MA on September 20, 1929, the youngest child of Neil T. and Lillian... View Obituary & Service Information

The family of Paul H. Kelleher created this Life Tributes page to make it easy to share your memories.

Send flowers to the Kelleher family.