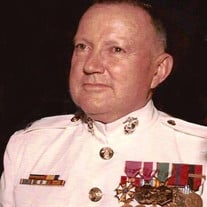 Hampton – Local Marine Corps legend, Colonel Paul F. Lessard, whose service to our nation spanned 35 years, including combat tours in the Korean Conflict and Vietnam, passed peacefully on to his heavenly Father on Wednesday, May 30, 2017 surrounded by his family after courageously battling a long-term illness. Lessard graduated from Hampton Academy where he played on the undefeated football team that won the State Championship in 1948 with his best buddy, Donnie Walker. He was married to Dorothy Quintal Lessard for 61 years and together they raised 3 children; Paul J. Lessard of High Point, NC, Beth Schottman of Lenexa KS, and Sharon Folan of Austin, TX. He was also a loving and doting grandfather of 7 and a great grandfather of 3. During his retirement years in Hampton, Lessard served in local politics as Town Moderator; in leadership at his church, Our Lady of the Miraculous Medal where he ushered and was an officer in the Holy Name Society. COL Lessard was an active member of the Hampton’s American Legion Post 35 where he served in leadership and greatly enjoyed the fellowship of his brothers-in-arms. The Colonel enlisted in 1951 as a PFC and rose up through the ranks, attending Officer Candidate School via the “Meritorious Noncommissioned Officer Program” and later graduated from both the Armored Officers Career Course at Ft. Knox, KY and the Armed Forces Staff College in Norfolk, VA. Throughout his career, in which he was affectionately known as the “Godfather of the Tank Corps,” he was proud to be a hard charging “Mustang” who held a deep commitment to and affection for “his Marines.” He served in 19 duty stations and was decorated on 14 occasions including 2 Legion of Merits with Combat “V” for gallantry in combat and the Vietnamese Cross of Gallantry. Lessard retired from active service as Colonel of Marines serving as Chief of Staff at Quantico Marine Base where he attended Officer’s Candidate School 27 years prior. Colonel Lessard was a patriot, loving husband, devoted father, loyal son and brother, and a United States Marine through and through, who was, to the very end “Always Faithful.” The Lessard family want to extend their love and thanks to the Staff at Edgewood Centre of Portsmouth for their exceptional care and to his beloved caregivers; Maureen, Renee, Shay, Shirley, Stacy, Mary, Connie, Ronda and especially Meredith “Angel” who so loving cared for the Colonel in the last years of his life. Visitation will be held from 4 - 7 PM on Monday, June 5, 2017 in the Remick & Gendron Funeral Home - Crematory, 811 Lafayette Road, Hampton. A Mass of Christian Burial will be celebrated at 12 PM on Tuesday, June 6, 2017 in Our Lady of the Miraculous Medal Church, 289 Lafayette Road, Hampton. Relatives and friends are respectfully invited. Burial with military honors will follow in the High Street Cemetery, Hampton. In lieu of flowers the family has requested you send memorial contributions to: American Legion Post 35 c/o: NH, 69 High Street, Hampton, NH 03842 or Compassionate Hospice Care c/o: 180 Orchard Dr., Unit 4, Londonderry, NH 03053.

Hampton &#8211; Local Marine Corps legend, Colonel Paul F. Lessard, whose service to our nation spanned 35 years, including combat tours in the Korean Conflict and Vietnam, passed peacefully on to his heavenly Father on Wednesday, May 30, 2017... View Obituary & Service Information

The family of Colonel Paul F. Lessard USMC Ret. created this Life Tributes page to make it easy to share your memories.