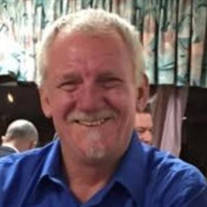 Hampton - Paul Stephen Marcey was born on January 23, 1957 and passed away unexpectedly on January 8, 2021. He was predeceased by his parents, John and Barbara (Murphy) Marcey, and a brother, John. He leaves behind his daughter Gabrielle Miranda of Saco ME, and his son Cleve Marcey and daughter in law Tanya Marcey of Falmouth MA, grandchildren Arianna, Andrew, and Isabella, brothers Stephen and Jimmy, and sisters Nancy and Patricia, as well as many nieces and nephews, and his girlfriend Lauren Jensen of Massachusetts. Paul graduated from Maynard High School in 1975 and went on to work for DTS in Maynard for many years. He married Susan Marcey in 1985 and adopted her two young children Cleve and Gabrielle, and lovingly raised them as his own. He loved being a father, and it came naturally to him. In 1992 he moved his family to Cape Cod, where he thrived as an assistant manager at Cape Cod Linens, a commercial linen company. He and Susan bought a house and a sail boat, and he loved living so close to the ocean. They divorced in 2000, but made many happy memories that their children still hold dear. Several years after his divorce, Paul moved to Florida for several years to be able to enjoy the ocean year round. In 2015 he moved back up to New England and settled in NH with his beloved sister Nancy Fuller and her husband Bruce in Hampton. He retired in 2019 from a warehouse job. Paul will be remembered as a kind hearted soul, the life of the party, and someone who was always willing to help, and never wanted anyone to worry about him. He was a prideful man. He loved cooking, eating, boating, fishing, The Patriots and having a good drink. He was a Catholic, a true family man, and most of all, a great father. His children were his greatest accomplishments. Paul was a hard worker all his life, and in his later years, the toll it took on his body finally caught up with him, and he was in constant chronic pain. Paul loved the ocean the most - he loved traveling to the Islands, Jamaica, Brazil, and the beaches of Florida. He hoped heaven had a beach waiting for him, and our family hopes he is now spending his eternal life on the warmest, most beautiful beach he could find.

Hampton - Paul Stephen Marcey was born on January 23, 1957 and passed away unexpectedly on January 8, 2021. He was predeceased by his parents, John and Barbara (Murphy) Marcey, and a brother, John. He leaves behind his daughter Gabrielle Miranda... View Obituary & Service Information

The family of Paul S. Marcey created this Life Tributes page to make it easy to share your memories.

Send flowers to the Marcey family.